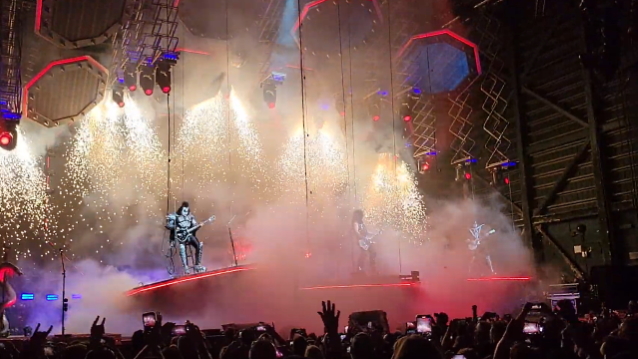 The show opened with "Detroit Rock City", with each of the bandmembers lowered to the stage by hydraulic platforms, decked out in their signature silver- and crystal-studded garb and iconic face paint. As the pods on which Simmons, Paul Stanley and Tommy Thayer were standing were lowered to the stage, Simmons' platform suddenly tilted to one side, nearly throwing him off balance. Fortunately, Gene's pod was eventually was lowered far enough for him to be able to step off without incident.

Simmons is no stranger to KISS concert mishaps. Back in 2016, the bassist/vocalist fell on stage while performing with the band in Bozeman, Montana. The incident happened during the closing song of KISS's set, "Rock And Roll All Nite", which featured cannons shooting a blizzard of confetti into the air.

Asked in a recent interview with Parade if any of the KISS members have ever gotten injured during a concert, Simmons said: "Not seriously. [Original guitarist] Ace [Frehley] was semi-electrocuted in Lakeland, Florida, before the days of grounding. Back then, all the guitars were connected with long wires to the amplifiers, and if not grounded properly, if you touched a metal railing on the side, which he did, you got knocked on your ass."

Earlier this year, Simmons told Art & Object that he hoped KISS would play another 200 shows before finally calling it quits.

"If I was in U2 or THE [ROLLING] STONES, both amazing classic bands, I could be Keith [Richards] or the Edge, wear a pair of comfortable sneakers and a t-shirt, and you're done, no fuss, no muss, easypeasy, no sweat," he said. "But no, I have to wear eight-inch platform heels. Each of the dragon boots weighs as much as a bowling ball. So you're walking around with two bowling balls on your feet, 40 pounds of armor studs, guitar, and all that stuff. Then I got to spit fire, fly through the air, it's exhausting. THE STONES, god bless 'em, can keep doing this into their eighties."

A couple of weeks ago, Stanley said that the final concert of the "End Of The Road" tour will likely happen within the next year and a half.

KISS launched its farewell trek in January 2019 but was forced to put it on hold last year due to the COVID-19 pandemic.

"End Of The Road" was originally scheduled to conclude on July 17, 2021 in New York City but has since been extended to at least the end of 2022. The trek was announced in September 2018 following a KISS performance of the band's classic song "Detroit Rock City" on "America's Got Talent".