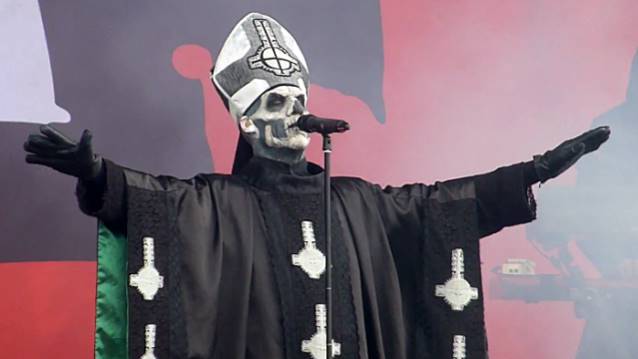 Metal Insider has uploaded a TV spot that apparently aired on VH1 Classic in which Swedish occult rockers GHOST tease the arrival of their third album, "Meliora", and the introduction of the band's "new" singer Papa Emeritus III, the three-month-younger brother of GHOST's previous frontman, Papa Emeritus II (pictured). Check it out below.

"Meliora" (Latin for "better") is tentatively due on August 21. The follow-up to 2013's "Infestissumam" was helmed by Klas Åhlund, a prolific songwriter, producer and guitarist who is also a member of the Swedish rock band TEDDYBEARS, and was mixed by Andy Wallace (SLAYER, NIRVANA, SEPULTURA, LINKIN PARK, GUNS N' ROSES). Songtitles set to appear on the GHOST CD include "From The Pinnacle To The Pit", "Majesty", "Devil Church", "He Is" and the expected first single, "Cirice", which is tentatively due at the end of May or in early June.

GHOST's June 3 warm-up show at at Doom in Linköping will serve as the group's live debut with Papa Emeritus III.

GHOST is planning to return to the studio before the summer to record several cover songs, including one by Leonard Cohen and another by the '80s Swedish band IMPERIET.

GHOST's last release was a covers EP, "If You Have Ghost", which sold around 5,000 copies in the United States in its first week of release to debut at position No. 87 on The Billboard 200 chart. Issued on November 19, 2013 via Loma Vista Recordings, the five-track EP was recorded and produced by Dave Grohl (FOO FIGHTERS, NIRVANA), and included cover versions of songs by ROKY ERICKSON, ABBA, ARMY OF LOVERS and DEPECHE MODE, plus a live version of the GHOST offering "Secular Haze", recorded in Brooklyn earlier that year.

"Infestissumam" was certified gold in Sweden last fall for sales in excess of 20,000 copies.

"Infestissumam" sold around 14,000 copies in the United States in its first week of release to debut at position No. 28 on The Billboard 200 chart.

GHOST was forced to modify its name in the U.S. to GHOST B.C. for "legal reasons."