Daniel Pavlica of The Rocktologist recently conducted an interview with GREAT WHITE singer Terry Ilous. A couple of excerpts from the chat follow below.

The Rocktologist: There has been a lot of turmoil lately around the right to use GREAT WHITE name. How does that affect the guys in the band?

Terry: Well, Daniel, I have to tell you that everyone is a bit annoyed and upset… I don't want to get info controversy. All I want to say is that the history of the band is very simple. The history speaks for itself. Mark Kendall started the band in 1978 with a different singer, a different drummer and a different bass player. Then band was by then called DANTE FOX. This lineup toured for about two years before Jack Russell joined the band. Basically, the band then toured and changed the name, but the point is that the band was started by Mark Kendall back in 1978. At the time, in 1978, Jack Russell wasn't even around, Jack Russell was in jail. Now, how does he affect me and the band? It's really annoying, to be honest with you. I'm not saying anything bad about Jack whatsoever, but I'm starting to get annoyed. I've never heard of a singer leaving a band and taking the name with him. I mean, when Steve Perry left JOURNEY, he called himself Steve Perry formerly of JOURNEY, the same goes for Lou Gramm (FOREIGNER), Ozzy Osbourne (BLACK SABBATH) or David Coverdale (DEEP PURPLE). The bottom line is that when you leave the band… Let's not forget that Jack never got fired, he left the band of his own accord. So, once again, the situation is very annoying, to be honest, because it's affecting our shows, it's bothering our fans, not to mention that the fact that Jack is saying so many bad things about us is just wrong. You know, I wish Jack only the very, very best, success and health; whatever he wants, I'm good with that. Still, I don't thing that saying bad thing about his former bandmembers is right. I think he should be more of a gentleman. It's like a relationship with your ex-girlfriend or your ex-wife. When it's over, it's over, and you have to remember the good times and move on.

The Rocktologist: GREAT WHITE is now up against JACK RUSSELL'S GREAT WHITE. Are you confident in reaching the top spot?

The Rocktologist: No problem there, then?

Terry: No problem there! You know, Jack was a great singer, and he did wonderful things with the band. I would never criticize Jack. I'm not that kind of a person. If he can come back with a great album I would say good for him. All I want for us is to move on and be happy. I just want to be left alone and do my thing, that's all.

The Rocktologist: One more question about Jack. He in particular has an army strong pack of devoted fans. How does it feel stepping into his shoes — on stage, that is?

Terry: I'd like for him to step into my shoes if he can do it! I'm a lead singer from XYZ and everybody knows that I have lots of chops. Singing my songs is not easy. Anyway, every time that I go onstage it's always a pleasure for me to sing songs that Jack and Mark have written or co-written… I know that Mark was mostly the writer in the band…it's always a pleasure to sing this songs. In a certain way, Jack will always be with me on stage, because I will be singing things like "Save Your Love" and "Lady Red Light". Every time I sing those songs, the fans would be singing thinking about him, and to be honest with you, they should think about him, because he was the voice in GREAT WHITE before. So I only have respect for him. Even my new fans should respect him as well. As far as going on stage and filling his shoes… Well, Jack was a great singer, and I'm also a great singer. It's not like, "Oh, my god, I don't know if I can do it!" The truth is that Jack and I are very similar but we are different also. I'm European so I'm very flashy on stage. My influences are Freddie Mercury and people like that, you know, people that put on a great show. So again, Jack and I are very similar. That's why I am the singer in GREAT WHITE now, because of the similarities, the blues, the rock, except that I'm a bit heavier that him. I grew up listening to Ronnie James Dio. My heart is into metal but also blues, because I'm very personal.

Read the entire interview from The Rocktologist. 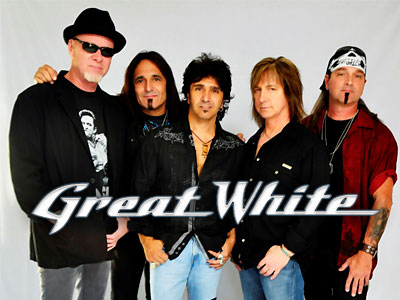