Due to popular demand during the presale, GRETA VAN FLEET has confirmed the addition of three shows to "Strange Horizons 2021". These specialty events will be the Grammy-winning band's only headline shows of 2021, with tickets for all shows on sale to the public today (Thursday, May 27) at 10 a.m. local time.

"It is truly a monumental time in history to be able to perform again," the band shares. "We are honored to experience these special shows with all of those who will be in attendance. Let us, once again, come together & celebrate the privilege of life."

A bold evolution from the band's 2018 full-length debut "Anthem Of The Peaceful Army", "The Battle At Garden's Gate" came together primarily on the road or while in the studio after the runaway success of 2017's "Highway Tune" led to the band packing up, leaving home, and eagerly soaking up new experiences on an extended road trip around the world.

Over the past three years, GRETA VAN FLEET — vocalist Josh Kiszka, guitarist Jake Kiszka, bassist Sam Kiszka, and drummer Danny Wagner — played to hundreds of thousands of people across North America, Europe, Japan, Australia, South America and New Zealand. While driving to gigs, the first-time world travelers passed many unfamiliar sights, from the favelas in Sao Paulo to the Gold Coast of Australia and everywhere in between, meeting and enjoying conversations with fans and other musicians that opened up new worlds to them. To cap off the change-filled era, the quartet moved from Michigan to Nashville, immersing themselves in Music City's rich history. The melding of all these experiences opened their eyes to amazing new worlds of culture, history, philosophy and spirituality — and ushered in an entirely new way of looking at life and the approach to their music.

Accordingly, GRETA VAN FLEET poured everything they experienced into these new songs - the music reflects their spiritual and intellectual growth, increased awareness of the inequalities plaguing the modern world, and deep empathy for what other people are going through.

Sonically, "The Battle At Garden's Gate" also feels bracingly modern, an embodiment of genre-blended musical freedom. Recorded in Los Angeles with Greg Kurstin (FOO FIGHTERS, PAUL MCCARTNEY), the album is ambitious and expansive, marked by epic journeys such as the second single, "Age Of Machine", and the Top 5 rock hit "My Way, Soon", which boasts a towering chorus hook and rip-it-up-and-start-again lyrics. 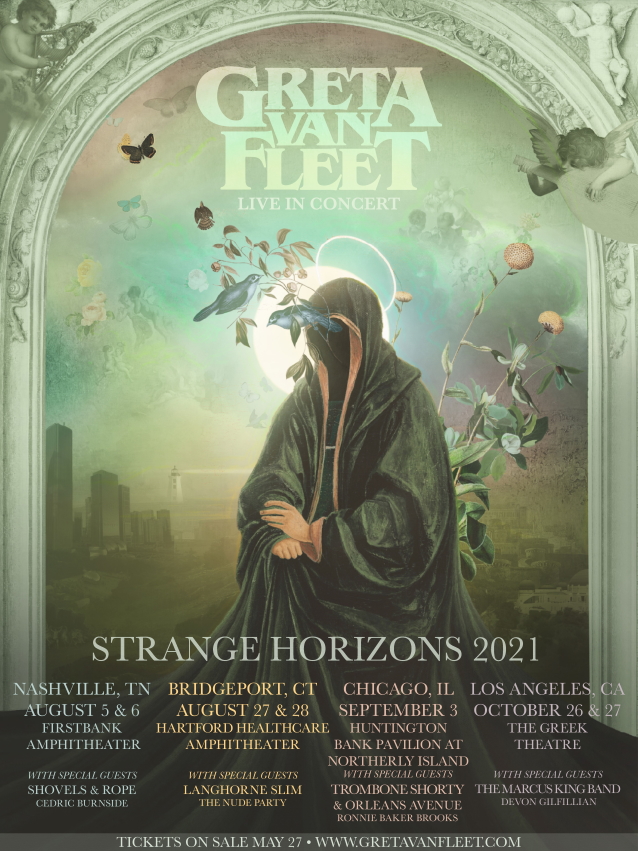