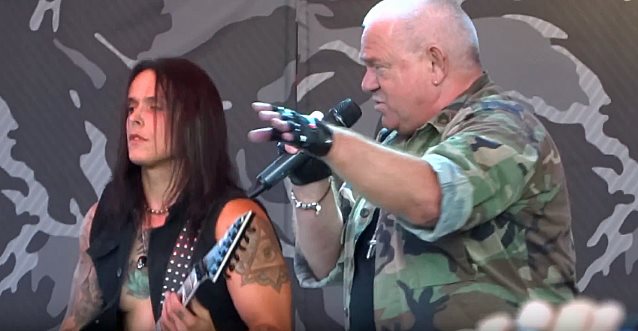 Bill Hudson has exited U.D.O. and DIRKSCHNEIDER — the two groups fronted by former ACCEPT singer Udo Dirkschneider — after only a year.

The American-based guitarist and the German bands decided to go their own separate ways "due to a difference in their individual visions for the future," according to a statement released by Dirkschneider. The statement adds that there is no "negative feelings on either side."

Hudson made his live debut with DIRKSCHNEIDER on June 4, 2017 at the Rock Hard Festival in Gelsenkirchen, Germany.

He hooked up with DIRKSCHNEIDER and U.D.O. as the replacement for Finnish guitarist Kasperi Heikkinen.

Dirkschneider has spent the last two years touring under the DIRKSCHNEIDER banner. The trek, which was originally supposed to conclude with the band's North American run in January/February 2017, has now been extended through the fall of 2018.

In addition to Udo and his son Sven (drums), the DIRKSCHNEIDER and U.D.O. bands include bassist Fitty Wienhold and guitarist Andrey Smirnov.

DIRKSCHNEIDER released "Live - Back To The Roots - Accepted!" last August as a DVD/2CD, Blu-ray/2CD and gatefold triple vinyl in two different colors.