Following last year's expansion to include three nights of music, America's premier rock festival — Rock On The Range — has once again upped the ante by growing to three full days of music for this year's annual event, May 16, 17 and 18 at Columbus Crew Stadium in Columbus, Ohio.

Weekend passes including Field GA, Stadium GA, hotel and VIP packages and a stadium 4-pack go on sale Friday, January 24 at 10:00 a.m. (ET). Additional details about the variety of ticketing, hotel and camping packages can be found at RockOnTheRange.com.

Some of the Rock On The Range 2014 artists weigh in with their thoughts on performing this coming May:

"We are so honored to be headlining Rock On The Range," said M. Shadows of AVENGED SEVENFOLD. "We take pride in our show and always try to outdo ourselves from the time before. Rock On The Range will be the perfect place to celebrate with our fans from all over the world and put on the killer show that they have come to expect from us. We are pulling out all the stops."

"We have had legendary shows at Rock On The Range," said Zoltan Bathory of FIVE FINGER DEATH PUNCH. "We always try to arrange our tour schedules so we can be part of this festival. It's just a must-do. Rock On The Range has become a destination event where people travel to from all over the country, if not all over the world."

"Super excited to be a part of Rock On The Range this year!!" said SLAYER's Kerry King. "I think it's awesome to have an edgy band like SLAYER on board for this round. Can't wait to hit the stage!!!"

"Sure it's important to do this festival for the bands, but mostly we do it for the incredibly loyal rock fans…They truly are the lifeblood of Rock On The Range, and it's really all about the value proposition to them," commented Joe Litvag, co-executive producer of Rock On the Range for AEG Live. "So now we come with GUNS N' ROSES, AVENGED SEVENFOLD, KID ROCK and more than 60 other amazing bands starting at $99 to deliver on our commitment of 'value' to rock fans everywhere… It's going to be an unforgettable weekend!"

"When Rock On The Range sold out last year, we knew the bar had to be raised. With these headliners along with FIVE FINGER DEATH PUNCH, SLAYER, MOTÖRHEAD, STAIND, SEETHER and so many more, there is no doubt now that Rock On The Range has become THE #1 rock festival," said Gary Spivack, co-executive producer of Rock On The Range. "And since year one, Monster Energy has been a partner at the festival and we are excited to announce their expanding support; their dedication to the genre as well as breaking new artists is second to none."

"Rock On The Range has emerged as a powerhouse event for our organization, the City of Columbus and rock fans from around the country," said Columbus Crew president Mark McCullers. "We have invested in some significant facility improvements that will add to the Ranger experience and this year's event will be another blockbuster show."

Presented by Danny Wimmer Presents, AEG Live and Crew Stadium, Rock On The Range is a multi-stage music and lifestyle event featuring a potent lineup of bands on three stages and is proud to be sponsored by Monster Energy, who return as the Main Stage sponsor; Crazy Dave's Music Experience (an interactive exhibit that features all the elements that are involved in making music in in a professional band setting); the Ernie Ball Battle Of The Bands Contest (launching this spring for your chance to play the stage at Rock On The Range).

The nationally renowned festival, part of the World's Loudest Month Festival Series, is centrally located in the heart of the country and has annually drawn huge weekend crowds since its inception in 2007, including a sold-out crowd of over 103,000 fans in 2013. 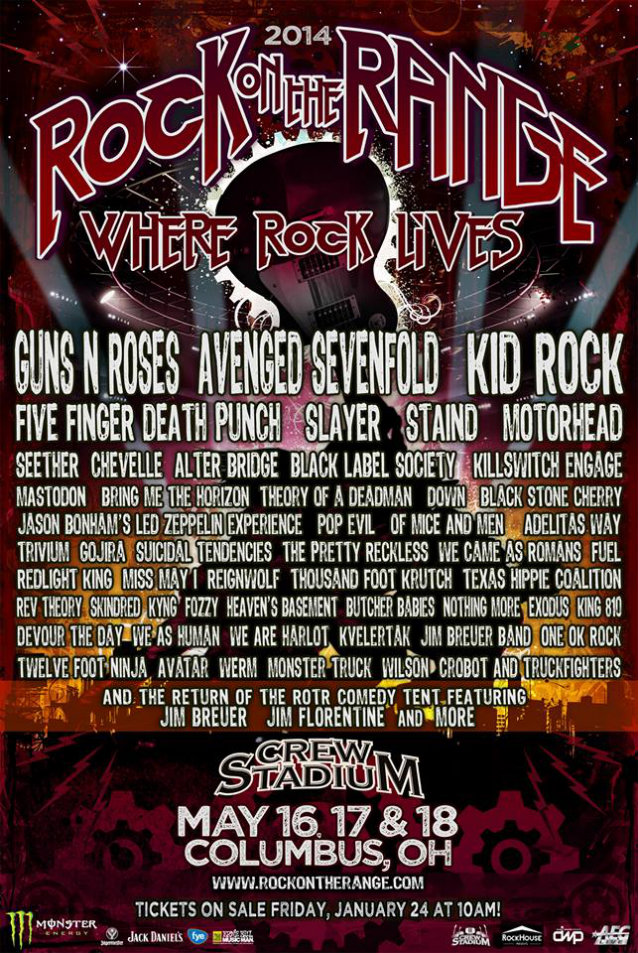