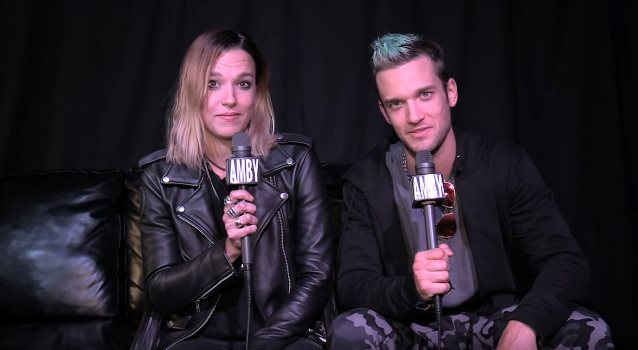 HALESTORM frontwoman Lzzy Hale and drummer Arejay Hale were interviewed by A Music Blog, Yea? in Toronto, Ontario, Canada this past October. You can now watch the chat below.

Asked about the progress of the songwriting sessions for HALESTORM's the follow-up to 2015's "Into The Wild Life" album, Lzzy said: "It's in the demo stages, but it's all kind of starting to gel together. 'Cause, really, initially what happens is that, 'All right, everyone just write for the sake of writing. Don't even think about anything thematic. Just go.' And now it's starting to all kind of take form."

Added Arejay: "On our last tour, we had one of our friends, Scott Stevens, come out with us, who is an amazing writer. He used to sing in THE EXIES back in, like, the early 2000s. [He's] an amazing writer. We wrote 'I Miss The Misery' with him, wrote a lot of songs with him. So it was cool having him on the road with us while we were kind of all frantically demoing and writing separately. And he kind of helped bring us all together in the writing process. So I think we kind of see the light at the end of the tunnel."

Arejay previously told United Rock Nations that he was surprised by the success of "Into The Wild Life". He explained, "To see that much of a great reaction, we really didn't expect it, 'cause we felt with this last record, we were kind of doing something very different from our last record; we were kind of playing a little bit more alternative, a little bit more experimental."

Arejay added: "So when the record came out, I really didn't know what kind of reaction it was gonna get. I was hoping it would do well, but I felt like our hardcore fans that liked our first two records would have hated it. But they actually liked it. So I was really excited."

"Into The Wild Life" debuted at No. 5 on The Billboard 200 album chart when it came out last year, selling 56,000 copies in its first week of release — more than double the first-week haul of their previous CD.

HALESTORM will release its third covers EP, "ReAniMate 3.0: The CoVeRs eP" on January 6, 2017 via Atlantic. Produced by Nick Raskulinecz (FOO FIGHTERS, ALICE IN CHAINS, KORN), the six-song set will feature an eclectic mix of songs from artists like METALLICA, SOUNDGARDEN, JOAN JETT & THE BLACKHEARTS, SOPHIE B. HAWKINS, TWENTY ONE PILOTS and WHITESNAKE. HALESTORM's take on the latter band's classic "Still Of The Night" is available for streaming now and as an instant download for fans who pre-order the EP.