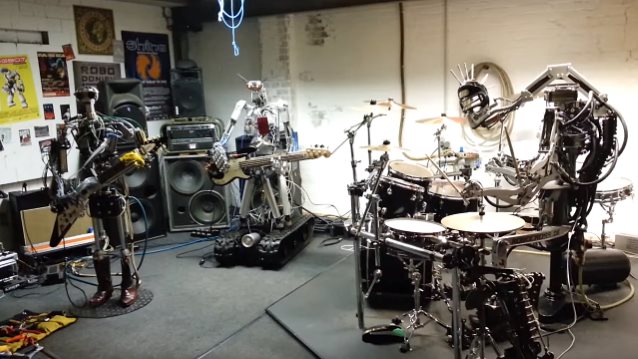 The three-robot act COMPRESSORHEAD — consisting of four-armed drummer Stickboy, guitarist Fingers and bassist Bones — has launched a crowdfunding campaign to help develop a fourth robot — a "heavyweight" lead vocalist — and to eventually become "the first 100% robot band to record an original album."

Says COMPRESSORHEAD: "In our workshop, the production wheels are steaming, as we prepare for the first record with our own music, which will be composed and recorded by no one less than John Wright, the punk rock legend of NOMEANSNO and THE HANSON BROTHERS. At the same time, a singer robot is about to be engineered over the coming months.

"We aim to release and premiere both, the new 'four-member band' show as well as the COMPRESSORHEAD record in summer 2016" at next year's Wacken Open Air festival in Wacken, Germany."

Hailing from Germany, COMPRESSORHEAD is comprised of 5-foot-tall humanoids. All are built out of scrap metal, with movement made possible by electro pneumatics and music controlled via Midi.

Frank Barnes, the human behind Stickboy, told NBC News: "If there is a loud reaction in the audience, the singer will be able to react to that and he can also make comments during the show."

He added: "We are presently building a robot that will probably weigh a quarter of a ton once it is finished."

COMPRESSORHEAD was "formed" in 2008 as a one-man roboto drum act, but only began to draw attention after becoming a trio and putting out a video of its version of MOTÖRHEAD's "Ace Of Spades" in 2013. The group's setlist also includes LED ZEPPELIN's "Whole Lotta Love", RAGE AGAINST THE MACHINE's "Bullet In The Head" and the RAMONES' "Blitzkrieg Bop".