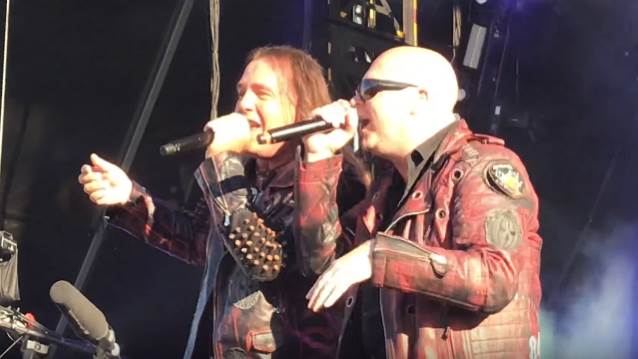 Fan-filmed video footage of HELLOWEEN's June 7 performance at the Sweden Rock Festival in Sölvesborg, Sweden can be seen below.

The "Pumpkins United" tour marks the first time Kiske has played live with HELLOWEEN since 1993. Hansen, who departed HELLOWEEN in 1988, has been joining the band onstage on various tours and festival appearances throughout the years. The set features several duets with Kiske and his replacement, Deris, along with many rarely played songs, including "Kids Of The Century", "Rise And Fall" and "Livin' Ain't No Crime". Hansen — who fronted HELLOWEEN until late 1986 — sings a medley of several early HELLOWEEN classics, including "Ride The Sky", "Judas", "Starlight" and "Heavy Metal (Is The Law)".

Asked by Spark TV whether HELLOWEEN will continue to compose new music with their reunited lineup, Hansen said: "Let's do this tour first, that's what we said. Of course, the ideas are there, for sure. But, now we want to focus on doing this. It will go until the end of next year on and off, but I think from the middle of next year we can be more definite about making an album. We'll see."

Added Weikath: "When we did this extra track for the tour, the 'Pumpkins United', it was out of schedule, because we were preparing for the tour. We were rehearsing. Usually we don't do track recordings during a rehearsal. You take your extra time for it. If we're ever going to record something together with everyone, it would certainly take more time than back when we were doing the 'Keeper [Of The Seven Keys]' records because there's more characters, more alpha animals involved. That's okay. It's going to work. It's going to take a lot longer. If we deliver something like that, we wouldn't want it to be half-baked in any way. There's not going to be a fucking filler track…"

Said Kai: "It better be good."

The North American leg of the "Pumpkins United" tour will kick off on September 7 in Las Vegas and conclude on September 15 in New York.