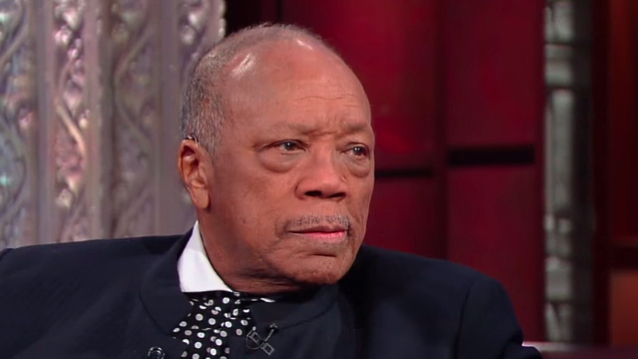 Iconic producer Quincy Jones has paid tribute to Eddie Van Halen, who passed away on Tuesday (October 6) at the age of 65.

Jones and Van Halen famously worked together when Eddie made a guest appearance on Michael Jackson's masterpiece album "Thriller". He was a surprise guest on "Beat It", the LP's third single. According to CNN, his blazing guitar solo lasted all of 20 seconds and took half an hour to record. He did it for free, as a favor to Jones, while the rest of his VAN HALEN bandmates were out of town.

Earlier today (Wednesday, October 7), Quncy tweeted: "RIP to the GREAT @eddievanhalen . Even though it took a couple calls to convince U it was actually me on the phone :) U killed it on Thriller, & your classic Guitarsolo on Beat It will never be matched. I'll always smile when I think of our time working together. Eternal Red heart & props."

Eddie spoke about his "Beat It" recording session in a 2012 interview with CNN.

"I said to myself, 'Who is going to know that I played on this kid's record, right? Nobody's going to find out,'" he recalled. "Wrong! Big-time wrong. It ended up being Record Of The Year."

The guitarist was diagnosed with mouth cancer in 2000 and had tongue surgery. He was later battling throat cancer and reportedly had been receiving radiation treatment in Germany.

RIP to the GREAT @eddievanhalen. Even though it took a couple calls to convince U it was actually me on the phone :) U killed it on Thriller, & your classic ?solo on Beat It will never be matched. I’ll always smile when I think of our time working together. Eternal ❤️ & props.