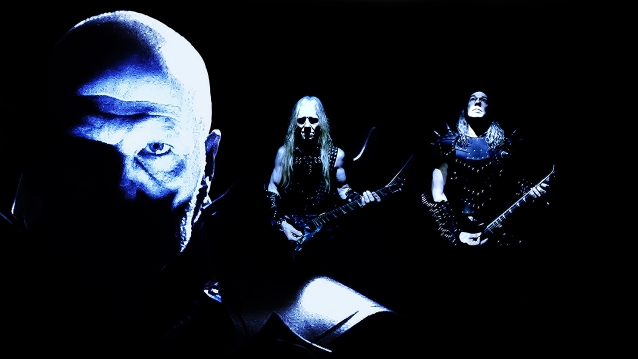 Says the band: "We have a long way to go until completion, but in the spirit of the Halloween season, we wanted to share with you a 'sneak peek' of the cover art for our next album, created by Safir & Rifas. These incredible artists fill us with inspiration.

"We will have more details about the artwork, album title and a hi-rez image posted at a later date.

"As you will hear with this music teaser, the songs are still in early incubation. We will release our first song single later next year."

Once again, INFERNAL MAJESTY went through some lineup changes before the disc was recorded: Eric Dubreuil (bass) and Kris DeBoer (drums) left and were replaced with two new members. Some may know new drummer Kiel Wilson from his time with Canadian melodic death metal outfit SEVERED SERENITY, while new bassist Daniel Nargang is actually the singer of the classic heavy metal outfit KICK AXE. They are joined by vocalist Chris Bailey and guitarists Steve Terror and Ken Hallman.