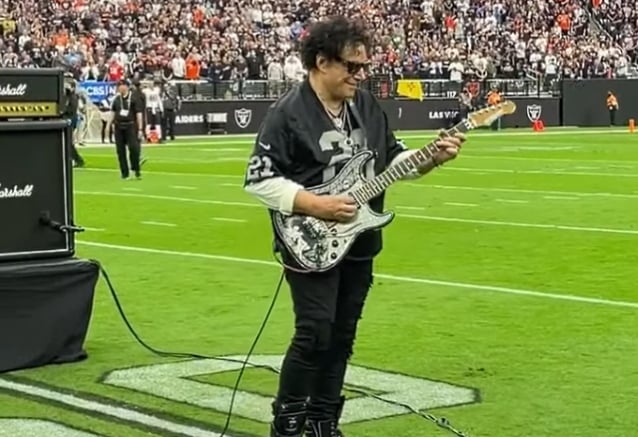 Neal Schon, founder and guitarist for JOURNEY, performed the U.S. national anthem prior to kickoff of Sunday's (October 10) game between the Las Vegas Raiders and Chicago Bears at Allegiant Stadium in Las Vegas, Nevada.

The Grammy Award-winning artist and Rock And Roll Hall Of Famer later shared video of his appearance and he added in an accompanying message: "WOW!!! What an absolutely Amazing Honor and Rush ! I heard the crowd Roar at the Sold Out game. Thank You for the invite Brad Phinney @raiders Let's do More!"

Admired as a trailblazer and inspiration to millions, the JOURNEY founder has long established his position as one of the greatest guitarists of all time, with some of the top all-time best-selling singles and albums, including multiple gold and platinum as well as two diamond certifications, over 100 million records sold, and over a billion Spotify streams.

Schon founded JOURNEY in 1972 and has been the only consistent member, having participated in every album and tour to date. He is not only the founding member of JOURNEY, but was a member of SANTANA at the age of 15 and has performed with a variety of other acts including BAD ENGLISH, JAN HAMMER and HSAS, and has released 11 solo albums, including his latest, "Universe".

Schon's national anthem performance on Sunday followed a stirring rendition by Broadway star Brian Flores on September 26 when his grandfather, Raiders legend and Pro Football Hall Of Fame Class Of 2021 inductee Tom Flores, was honored and presented with his Hall Of Fame ring during a halftime ceremony. The other performances in 2021 were Gladys Knight, the "Empress Of Soul," on September 13 prior to the regular season opener on "Monday Night Football" and music industry icon Marie Osmond prior to the August 14 preseason game, the first Raiders game with fans at Allegiant Stadium.