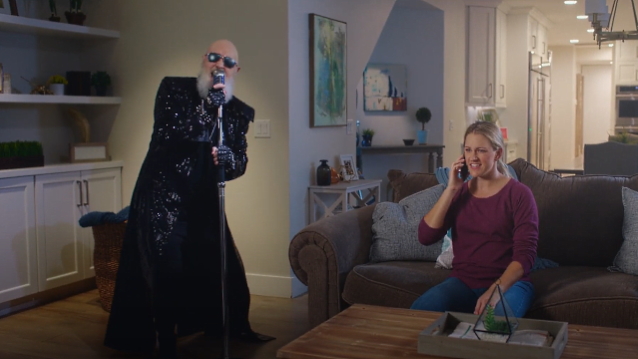 Lots of insurance ads use characters from pop culture. It can be a little tricky remembering which brand goes with what celebrity. But only one insurance brand has the word "rock" in its moniker: Plymouth Rock. So creative agency HeyLet'sGo proposed making that connection indelible with a simple construct: A) Customer has positive insurance experience, and B) Customer gets "Plymouth Rocked".

Each 30-second TV script called for a booming rock vocalist to sing a familiar phrase: "You got Plymouth Rocked!" So Plymouth Rock hired none other than Halford to play the role of "The Rocker."

Said Halford of the project: "It feels good to be the first heavy metal pilgrim to partner with Plymouth Rock. I had a (laser) blast on this project."

Each film features an everyday couple at home, rocking out with the JUDAS PRIEST frontman, as they have uplifting, money-saving interactions with Plymouth Rock.

Directed by Cary Truelick of True Story Films, the films — which can be seen below — were shot in Rob's hometown of Phoenix, Arizona. Seeing Rob walk from his trailer to the set in the 116-degree Arizona summer heat — in a full-length black leather coat — was indelible.

HeyLet'sGo CCO Tim Cawley is an ASCAP songwriter who wrote the music and lyrics for the campaign's three songs. "Going into the studio with Rob Halford? You're not going to have a better day at work than that," he said. "Don't let his menacing growl fool you. Rob was totally easy-going and collaborative — bringing his rock star charisma in the vocal booth and on set." The music was recorded at Premier Studios in Phoenix with producer Jeremy Parker, also known for his work with DISTURBED, MUDVAYNE, SLIPKNOT, GODSMACK and EVANESCENCE.

Cawley tells BLABBERMOUTH.NET: "Other than a cameo in a Virgin Mobile ad over a decade ago (as a priest), this is Rob's first-ever advertising client appearance."

The campaign — touting savings for home and auto, plus helpful online tools — includes TV, online video, banners and radio, and launches this week.