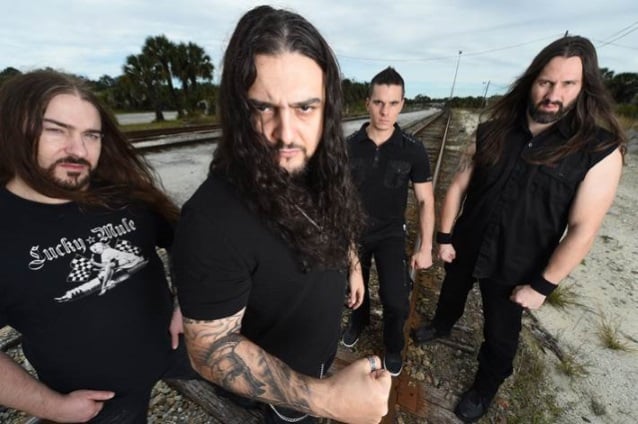 The official lyric video for "Guillotine", a brand new song from Montréal, Quebec, Canada-based melodic death metallers KATAKLYSM, can be seen below. The track is taken from the band's upcoming album, "Meditations", which will be released on June 1 via Nuclear Blast. The 10-song disc was produced by the band's guitarist Jean-François Dagenais and drummer Oli Beaudoin, and was mixed by Jay Ruston (ANTHRAX, STONE SOUR). Mastering duties were handled by Paul Logus (PANTERA).

Commented singer Maurizio Iacono: "'Guillotine' is a powerful track that holds some of KATAKLYSM's most important traits: fierce and fast riffing, melodic accents and groove-laden power punches to the gut. We are focused, determined and dedicated."

The "Meditations" cover artwork was created for Ocvlta Designs by Surtsey, who also crafted the artwork for KATAKLYSM's previous record, "Of Ghosts And Gods".

Iacono said: "This is a very personal album to me with old wounds being revisited — I felt a big urge to pour my soul into this release. The boys and I were isolated under the same roof during the writing process, just like we did in the early days... with no worries except having fun, being honest and delivering a serious album that represents us today but respects our past. Our new story is coming and we are eager to share it with you!"

Dagenais told That Drummer Guy about KATAKLYSM's decision to work with Ruston: "It was kind of a gamble for us because you never know because our music is so extreme and needs a certain type of process to it, to be able to be delivered right and we weren't sure if going with a guy like Jay Ruston, who is more of a traditional heavy metal/rock producer, that it could work. We all knew that, 'Okay, if this works, it's going to be really awesome. If it doesn't, it could be such a mistake.' No, it wasn't. We got our mixes and we were, like, 'Fuck yeah!' All of us together. We made the right call there and it was perfect. But, we worked really hard on the tracking, me and Oli. We spent months on recording the drums and guitars and the bass tracks and making sure Maurizio delivers the right energy with the vocals. We really polished the thing and we sent it to Jay Ruston and he totally brought it up to another level. So, that's really exciting."