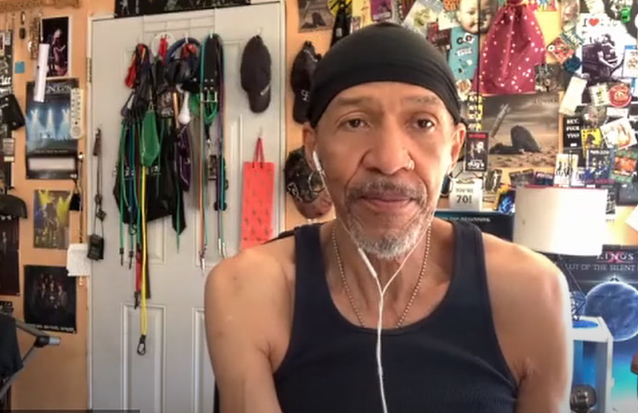 In a brand new interview with the "Breaking Absolutes With Peter Orullian" podcast, KING'S X frontman Doug "dUg" Pinnick spoke about the tension and polarization in the news and in social media and how people consume what they want to hear and reject what they don't like.

"A lot that goes on in my mind all the time when it comes to my relationships with people is always to understand where they're coming from so I can understsand what they're doing instead of getting mad or upset and we can articulate how we feel so that we can learn to live with each other in a way that doesn't have conflict," he said (as transcribed by BLABBERMOUTH.NET). "And I'm always searching for new ways to make peace — find out a friendship, I call it; I wrote a song about it a long time ago. And my whole life has been that, is how do you become good friends with people? You get to know 'em, you get to understand 'em, you get to love 'em."

He continued: "I was comfortable being able to get with people and agree and disagree and everybody's fine, and I felt like I was happy about it; I was having lots less drama and stuff. And all of a sudden, algorithm comes in, and all of a sudden all of us are watching our YouTube or our phones or whatever, and Big Brother, he's watching everything that we do and then he feeds us everything that we keep looking at. And this is how many years — 10 years or so since all this started happening. So we got people to a point where there is not one person who is on the phone that has the same reality as you — not one person. And anything that you think of, you can find a community that will embrace you and ask you to come live with them and embrace their belief until you're consumed with it. And then, all of a sudden, you don't trust anyone and we've gone back to tribes. That's what the Internet has done — it's created tribes like when we were cavemen."

Pinnick went on to say that the problem with social media — which amp up moral and emotional messages while organizing people into digital communities based on tribal conflicts — is unlikely to improve any time soon.

"I don't know any way out," he said. "At this point, I don't see any way out. Even if they shut all our computers off, we've already got our tribes. And none of them are ever gonna be open to an outside influence. Let's start with religion all the way down. It's over. The only thing I believe that can change is a flood or an alien invasion, where we all drop our guard and go fight for humanity — some unifying crisis."

Doug is known first and foremost as the soulful singer and bassist for hard rockers KING'S X. Throughout the band's lengthy and legendary career, KING'S X released twelve albums and influenced the likes of PEARL JAM, SOUNDGARDEN, DREAM THEATER, PANTERA, and many more. Throughout the early 21st century, Pinnick remained the "go-to singer" of rock — as evidenced by his appearance on recordings by first-rate rockers including Jeff Ament, Eric Gales, George Lynch, Ray Luzier, and many more. Doug has issued other solo albums under his own name, including 2005's "Emotional Animal", 2006's "Songs From The Closet", 2007's "Strum Sum Up", and 2013's "Naked".