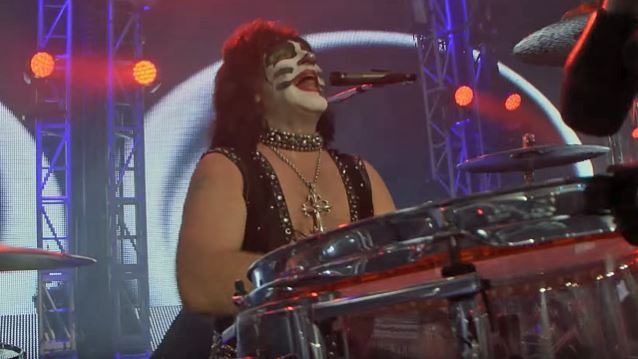 During a brand new interview with Classic Rock Revisited, KISS drummer Eric Singer, who "portrays" original KISS sticksman Peter Criss's character in KISS's live show, spoke about how he feels about the fact that some fans continue to criticize him for wearing the "Catman" makeup."I know some fans get mad when I say this, but I mean it… We are talking about a fucking band that puts on makeup and wears high-heeled boots," he said. "When I say that, people say, 'You don't get it.' Yes, I do get it. They are telling me that KISS is their life and how important it is. How about me? I fucking play drums in the band. You don't think that is important to me?

"Sometimes I hate to say this but this is how I pay for everything that I do. It is the way our system works. You get a job. You make money. That is how you pay for your shit. In that regard it is pretty elementary. For fans who think I don't understand… I absolutely understand. I'm a fan too. I make it real simple."

Singer, whose three tours of duty in KISS date all the way back to 1991 and bookended Criss's two reunion stints with the group, continued: "I always tell friends that my favorite era of KISS that influenced me and that I relate to the most is the original band and those first three records. You know why? Because for me, just like everybody else says… everyone has their KISS, if you will. I am using KISS an analogy but it applies to anything.

"My KISS was the very first KISS that came on the scene in 1973 or 1974. I saw them on that first tour. They opened for THE NEW YORK DOLLS. I bought those records. I know the impact that they had on me and everybody around me at that time when they burst onto the scene. That is the KISS that I relate to. Later on, the later versions…. not so much. I always followed KISS and I liked everything they did and I respect everything they did, but the other versions didn't influence me during that time period. I am talking about 1974 to 1975… For me, that was the time line that really affected me.

"I have many friends that will say their version of KISS was 'Animalize' or 'Hot In The Shade' or it was another era. How can they say that? But I respect what they are saying. For that person, that is when they discovered KISS and that was the time of their life when it really affected them and they had a connection to them. That is their KISS. You need to be somewhat understanding and respectful to that. Everybody has a different timeline of the band when it emotionally connected with them. That goes for a lot of bands. LED ZEPPELIN has fans like that. For some, 'Physical Graffiti' was the album that hooked them, but for me it was the first three albums. It is the same with Alice Cooper. For me, Alice Cooper… I was still a kid when he first came out. I remember 'School's Out', but, for me, it was 'Billion Dollar Babies' that hit home for me. 'Welcome To My Nightmare' and 'Goes To Hell' were huge for me.

Singer, who initially replaced the late Eric Carr, the man who stepped in for Criss, added: "With KISS, I point this out to people. People say they related to this guy in KISS and I ask them how old they were. Sometimes they say, 'I was eight years old when I first saw the band.' I say, 'If you were eight years old and you saw any band that you liked then, you would think they were Gods. You would have thought they were a lot better than they really were just because of your knowledge and experience you had at the given time.'

"How much musical knowledge do you have at eight years old? Not a lot. If you see a band like KISS come on stage at that age and you see that spectacle, how could that not blow you're fucking mind as a little kid?

"I'm not saying this to take away from KISS at all, but KISS was really about the show. What attracted you to them was that image and that show. If KISS just stood on stage and played songs without the show, then I doubt they would have held your attention."

"I've never tried to replace Peter Criss or Eric Carr. It is like a train. It comes into the station and they say, 'We need another person to keep this train running.' You need another person to shovel coal to keep the engine running. I just got onboard and now I am one of the guys in that fucking engine room helping keep that locomotive run. To me, that makes a lot of sense when you put it into basic terms.

"I understand that you can't try to take the emotional factor out of the equation. To fans, that is impossible. It is not going to happen. They only, you know… they wear their hearts on their sleeves and they look at it from an emotional point of view. I get that and I respect it. You're not going to get me to think that way. I have a unique perspective in KISS."

In 1996, KISS did a full-on reunion with the original lineup that included Criss and guitarist Ace Frehley.

After Criss returned and left again, Singer rejoined the lineup in 2004.

The current lineup, as it has been since Singer returned, is Paul Stanley, Gene Simmons, Singer and former BLACK 'N BLUE guitarist Tommy Thayer, whom Singer has known since the mid-1980s.