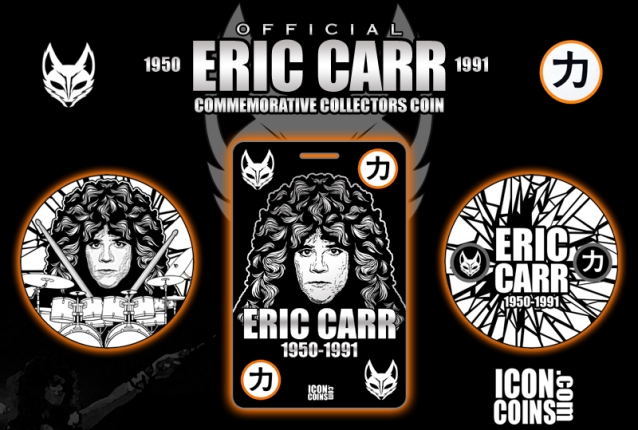 Carr, KISS drummer from 1980 until his untimely passing in 1991, contributed his talent to the bands many gold and platinum albums during his tenure, and can be heard on the band's many hit songs from the 1980s, including "Lick It Up", "Heaven's On Fire", "Crazy Nights", "Tears Are Falling" and "Forever", to name a few. In addition to his musical contributions, Carr was equally known for his inviting personality and genuine love for the fans. From the time he joined the band to this very day, Carr remains one of the most beloved members of the KISS family.

Each Eric Carr commemorative collectors coin is die struck in heavy solid brass with an antique silver finish. The front design features a beautiful sketch portrait of Eric Carr while the back design features his name, birth and passing years, Fox and Chikara icons representing his musical personas, over a shattered glass background reminiscent of the "Crazy Nights" album cover.

Each coin will also include an exclusive backstage-pass-style laminate that will act as the coins certificate of authenticity featuring design elements from the coins themselves as well as an Eric Carr mini-bio.

This addition to the Icon Coins family is limited to 100 coins minted.

Icon Coins designer Ralph Asbury has a long history when it comes to keeping the memory of Eric Carr alive. It started in the late 1990s with an action figure. At the time, McFarlane Toys had released the first set of official KISS action figures as KISS was back on top of the world with the reunion tour. To help fans complete the set, Ralph created one of the earliest custom-made Eric Carr action figures by re-purposing the Paul Stanley figure to represent the Fox character. (One of these custom creations can be seen on the Eric Carr documentary "The Eric Carr Story: Inside The Tale Of The Fox".) This led to an introduction to Eric's family and the next effort to honor The Fox…

In 2000, Eric Carr tribute album "Prophecy" was released. This project was a collection of songs written and performed by Ralph (under the name Ralph E. Carle) and dedicated to Eric Carr. The packaging was designed as a fantasy version of the 1978 KISS solo albums featuring Ralph on the cover as a fictional KISS character presented as a portrait similar to the existing albums. As the bandmembers dedicated their solo albums to the other members, "Prophecy" was dedicated to Eric. The album opens with a rare radio ID the was recorded prior to Eric's passing in 1991. Also included on the album are two different versions of the song "Your Turn To Cry", as pre-KISS song recorded by Eric Carr with his teenage band THE CELLARMEN. The first version on the album is a cover version of the song, and the second version is the original recording featuring Eric on drums and vocals. "Prophecy" was well received by KISS and Eric Carr fans alike. Ralph appeared at KISS Expos around the U.S. and Canada performing the songs and meeting fans of The Fox.

In 2011, "Eric Carr: Unfinished Business" was released. This project featured various artists and friends of Eric Carr completing demos and incomplete songs left behind by Carr. Ralph Asbury was called on to design the packaging CD as well as coordinating some of the guest musicians who contributed to the album, including A.J. Pero of TWISTED SISTER and Kee Marcello of EUROPE.