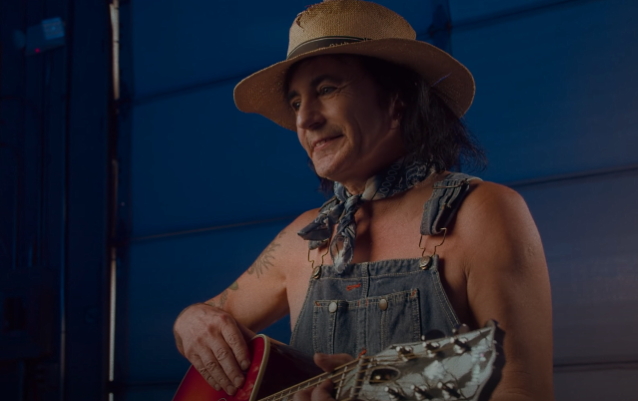 In a new interview with The Rock Experience With Mike Brunn, L.A. GUNS singer Phil Lewis spoke about how the rise of grunge in the early 1990s forced most hard rock bands off the radio and MTV, with album and tour sales plummeting.

"The whole thing, the whole L.A. music scene was becoming more about the hair and the silliness of it," he said. "We weren't really silly. I mean, we did some silly stuff, but we always fancied ourselves to be more of a biker, leathery, dirty band. We were quite happy being dirty.

"The trend towards — and this is definitely, I swear, it's not a knock — but when you get guys like Kip Winger; he's like a model, he's so fucking handsome [with] big hair and big teeth, and we're quite dirty and ugly, and we've got missing teeth.

"I didn't like the direction it was going," Phil admitted. "And I think it was probably about time to cull it. And these things have a two- or three-year cycle. And I felt like we'd run ours. We got lumped into what they call 'hair metal,' 'cause we were around at that time. But we never were."

Upon release in September 1991, NIRVANA's "Smells Like Teen Spirit" wreaked confusion upon the hair metal vanguard, putting an end to an era dominated by glamorous, androgynous and sparkly rock stars who absolutely saturated the radio waves and were almost exclusively what aired on MTV.

Last year, TWISTED SISTER singer Dee Snider told Ultimate Guitar that he didn't blame grunge for the death of hair metal. "Hair metal did it to itself," he said. "It became too commercialized, and then it got unplugged and became nothing but power ballads and acoustic songs, and it wasn't metal anymore. It had to go; it had to change."

Snider's TWISTED SISTER bandmate Jay Jay French told Daniel Sarkissian of the "Rock Is Dead?" documentary about the death of hair metal and arrival of grunge: "The only band that leapfrogged and saved themselves was GUNS N' ROSES. And my theory is that GUNS N' ROSES was not perceived as a joke. They came out of L.A., but I think that Axl [Rose], first of all, had a great voice. I think that they were perceived as real, not fake. Like, they were real junkies, not pretend junkies. So there's an authenticity. It's all about authenticity, and grunge is all about authenticity. People wanted authenticity, so they got it with grunge. It wiped out the perceived frivolousness of hair metal, which is, 'Hey, man. Let's party. Let's get the girls and drink.' I think people just got sick of that, and they wanted [something more] authentic."

Former MÖTLEY CRÜE singer John Corabi told Newsday in a 2014 interview that the CRÜE album he sang on was a commercial disappointment because the music scene had changed, with hair metal brushed aside for grunge.

"Everybody was listening to ALICE IN CHAINS and SOUNDGARDEN," Corabi said. "At that point, we were considered passé."

According to Corabi, CRÜE's ill-fated 1994 American tour " was a nightmare. We weren't selling tickets. It was just horrible," he said.

In 2019, former TNT singer Tony Harnell said that the rise of the grunge movement, which symbolized the working-class spirit and focused on music over image, was ultimately a positive thing for the rock genre because it "shined a really harsh light on how boring and repetitive" the '80s glam metal scene had become. He explained: "It was the same look, the same songwriters, the same producers, and it just started to be… Nobody was offering anything… Don't get me wrong, there were a few that got in there that were interesting and different, but, for the most part, they were all just sort of rehashes, slightly, of other bands."