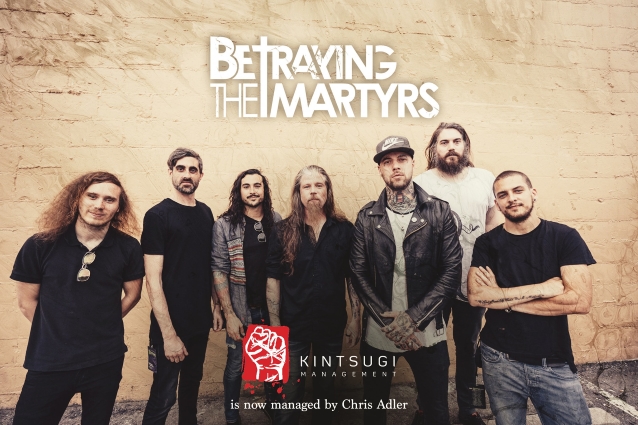 LAMB OF GOD drummer Chris Adler has announced the addition of French metalcore kings BETRAYING THE MARTYRS to his management agency, Kintsugi Management.

BETRAYING THE MARTYRS vocalist Aaron Matts said in a statement: "We are beyond excited to announce our collaboration with the legendary Chris Adler and Kintsugi Management. To be on board the same ship as Chris and his incredible team has breathed new life into what we do. Their backing support goes beyond anything we have known previously. It's truly an honor. With our next release in the barrel and ready to be fired into the world, we could not be any more prepared for the road ahead. We announce our signature to Kintsugi with great pride."

Adler says: "Kintsugi is proud to be working with BETRAYING THE MARTYRS. It's an exciting time for the band, we believe in the guys and there's an incredible new album soon to drop. The band continues to grow a dedicated, international fan base via their hard work, vision and brutally contagious music."

BETRAYING THE MARTYRS will launch its North American "Summer Rapture Tour 2019" across this July, with support from ENTHEOS, WITHIN DESTRUCTION, SENTINELS and DEFYING DECAY.

Adler has been sitting out LAMB OF GOD's live appearances since last summer because he has been undergoing physical and occupational therapy for injuries he sustained in a motorcycle accident in late 2017. Filling in for him has been Art Cruz, who has previously played with PRONG and WINDS OF PLAGUE.