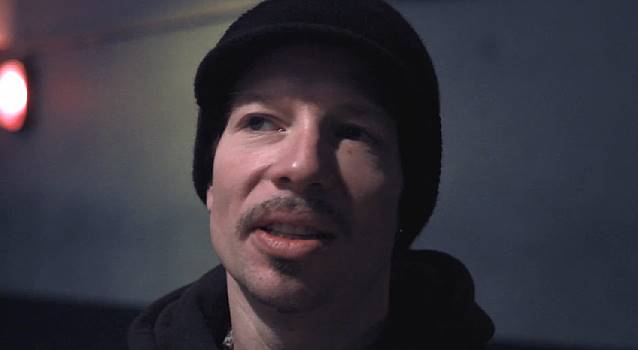 Steven Rosen of Ultimate-Guitar.com recently conducted an interview with guitarist Willie Adler of Richmond, Virginia metallers LAMB OF GOD. A couple of excerpts from the chat follow below.

Ultimate-Guitar.com: "As the Palaces Burn" didn't begin as a documentary about Randy Blythe's trial.

Willie: The original idea was to get the camera to turn away from us for a second. And really show the magnitude of what the scene is that we're involved with and the people that make up that scene being the fans. So, originally, the spotlight was — and part of the film highlights this, but obviously, it takes a very dramatic turn — on the fans and to really show just how close and personal and how much of a community this genre and we do entails.

Ultimate-Guitar.com: It's obvious that Randy had no intention of trying to harm Daniel Nosek when he climbed on the stage. It was just a horrible accident.

Willie: Yeah, I mean, like Slash said in the film, you're entering a frenzied, party environment. Unfortunately, tragedies can happen and there's no malevolence behind anything. It's just a frenetic atmosphere, and unfortunately, accidents can happen. It is a shame.

Ultimate-Guitar.com: Playing devil's advocate — do you know what LAMB OF GOD would have done if Randy had been found guilty?

Willie: No, I really don't. Yeah, like you said, it was a distinct possibility in that he had already served five weeks in prison and he was gonna go back. I have no idea what would have happened. I am very thankful that it turned out the way it did. And at the same time, still and probably always will be thinking about Daniel's family and hopefully they can have the same form of closure we can enjoy. I don't see that happening, but they're all in our prayers and hopefully they can achieve the kind of closure we have.

Ultimate-Guitar.com: Randy's decision to return to the Czech Republic took a lot of courage.

Willie: Yeah, that's the true definition of a man. Randy, in my book, is by far the most admirable man with the utmost standup character I've ever met in my life.

Willie: It really is. The entire way Randy handled it, I would hope makes people kind of stand back and I guess kind of give a little bit of a guideline how to live your life and to always do the right thing.

Ultimate-Guitar.com: LAMB OF GOD is now working on a new album?

Willie: I think right now we're kind of just still a little decompressing over the past year and the past touring cycle. But as for myself, I've been writing every day. I kinda made a pact with myself in order to kind of be ahead of the game once we all get back together collaboratively and start to officially write the record. I want to be able to write at least one riff a day so I could be well ahead and try and try and write every day.

Ultimate-Guitar.com: How has that process been working for you?

Willie: So far so good. It's workin' out and I'm having a good time.

Willie: I know, oh yeah. I get that little tingle in my stomach and I'm like, "Aw, fuck yes" and I just bob my head to it. I'll just turn on my production software and hit the record button and just let it go and just riff. Then when I finally get something, I'll set a bpm [beats per minute] to it and then just nail it. Yeah, I know. Somehow I can't really describe it in words but you get that feeling and you get those little old goosebumps.

Ultimate-Guitar.com: When you're not in your studio churning out riffs, what is a typical day like for you?

Willie: In the recent year or recent year-and-a-half, I like to get up and get a good exercise in. I found that it really, really just focuses me and clears my mind and helps me just start the day basically. I think by now I feel a little bit off if I didn't. So that's how I start and then I go in my music room and kind of dilly dally a little bit and say, "Alright, it's time to start playing." And get a bunch of coffee and then just start playing.

Read the entire interview at Ultimate-Guitar.com.