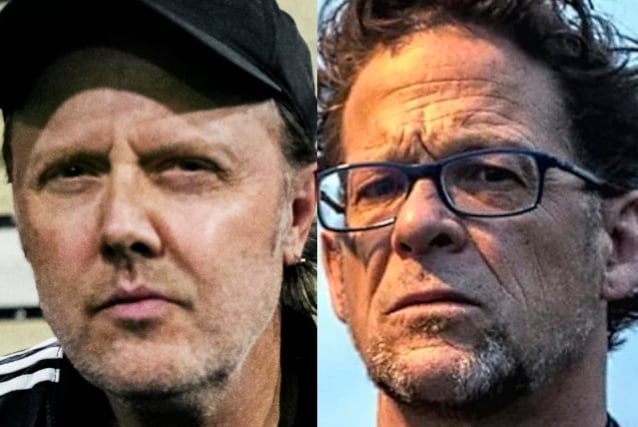 "My theory now is I could love anybody, really, at the end of the day," Hetfield said. You get to know them, you get to know where they've come from, you understand where their parents came from — all of that. How are you you? I can accept that. I can really accept that. There was more to be revealed. I mean, really.

Ulrich added: "If you think about it, Jason is the only member of METALLICA who's ever left willingly, and that in itself is a statistic. And the resentment from James and I was just so... [We felt like] you can't do that. You can only leave if we want you to leave. And then we weren't equipped at the time to do a deep dive into why he was leaving. And so, of course, now you can see 20 years later, it makes complete sense.

"We write the songs; we make the decisions; we do all of it," Lars continued. "You have no creative outlet in this band; you have no creative voice. And then when you go and do something that gives you satisfaction and a way for you to express yourself to the rest of the world, then we get fucking pissed at you. And then that resentment then goes to you leaving the band. I mean, that's kind of Psychiatry 101 here. But we weren't equipped to see that side of it. Twenty years later, so now it makes complete sense."

Ulrich added: "Jason gave 14 years — every day, every performance, he was there always... I mean, we always used to joke. It's, like, 'He's so fired up. Come on, dude. Slow down.' He was the fucking first guy in and the last guy out. He was signing autographs when we were driving by waving on the way out of the buildings. I mean, he really was. And I now [am] finally equipped to appreciate every moment that he gave. And we have, I think, so much respect for each other now, so much appreciation. Ten years ago, when we did the 30th anniversaries, when he came up and played four nights with us at the four Fillmore shows, played two nights with us, seeing Rob and him together up there, that felt like it was the beginning of the thawing of where we are now. But he's been a very integral part of the [Black Album] reissue and the re-release and has done interviews and been very, very helpful. He did the unboxing of the box for the cameras and the whole thing. I mean, he's been so gracious."

Newsted was METALLICA's third bassist, following Ron McGovney and the late Cliff Burton. Trujillo took over in 2003 after Newsted's exit.

Newsted's exit from METALLICA was documented in the band's 2004 documentary, "Metallica: Some Kind Of Monster", which followed the members of the group through the three most turbulent years of their long career, during which they battled through addiction, lineup changes, fan backlash, personal turmoil and the near-disintegration of the group while making their "St. Anger" album.

While initially helping METALLICA towards restoring band harmony, the film shows the band's "performance coach" Phil Towle, a former psychotherapist who was brought into the picture in January 2001 to help Hetfield, Ulrich and Kirk Hammett repair their relationship with Newsted, attempting to increasingly insert himself into the band's creative process, submitting lyrics for the album and even attempting to join them on the road.

"Some Kind Of Monster" also documented Hetfield's spiral into alcoholism and decision to check himself into a rehab facility. Hetfield's re-emergence from rehab is when the film really gets into gear, with the chief worry in his mind whether or not he could do METALLICA sober.

In a 2004 interview with The Kansas City Star, Towle spoke about being present when Newsted told the band he was leaving, though that scene isn't in "Some Kind of Monster". Asked how that went down, Towle said: "We'd been sitting around talking for about a half-hour when Jason says to me, 'I want to talk to the guys. Will you excuse me?' So I went into the other room in the suite. I could hear all this pain resonating from the room they were in, and after about 10 minutes, I went back in. Jason says, 'I don't want you in here.' I said, 'I was hired to be here, to work with you guys and your issues, and I can't in good faith stay in the other room.' There was silence. Then Lars says, 'Let him stay.'

"They were all jarred so much that a family member for 14 years was leaving for various reasons. They said, 'We gotta do something about this.' Here's what I offered: Rather than invest energy in being pissed at Jason, use this thing to explore the underlying issues of discomfort and conflict that led to his leaving.

"In a very dysfunctional family, Jason had the courage to stand up. He was the one who set in motion this process of calling everyone out. I'd read an old interview with METALLICA in Playboy in which the band members separately trashed each other. So now the conflict had come to a head."

Jason spoke in detail about the reason he left METALLICA in a 2013 interview with Scuzz TV. Newsted said that his eventual split with the group was over the way his then-side band, ECHOBRAIN, was handled. Newsted explained: "The management of METALLICA was very, very excited about ECHOBRAIN, wanted to take it out for me, wanted me to do ECHOBRAIN also, with METALLICA. They felt ECHOBRAIN was that good, the singer was that good, and it didn't affect METALLICA because it was a totally different kind of thing, and I was in METALLICA; that would give it its pedigree already."

Newsted continued: "They had told me, pretty convincingly, 'This is a great record, we've been playing it around the office, that's all I’ve been hearing, it's fantastic, this kid has a great voice. Let's do something with this.' That's what they told me, and then James heard about it and was not happy. He was, I think, pretty much out to put the kibosh on the whole thing because it would somehow affect METALLICA in his eyes, because now the managers were interested in something I was doing that had nothing to do with him."

Newsted told The Pulse Of Radio a while back that he never saw how ECHOBRAIN could have interfered with METALLICA. "I never felt that it was going to affect METALLICA in any way," he said. "There was no way that it could. The monster and the integrity and the legend that METALLICA's built, it would take a lot more than that to ever affect it."

Newsted added, "The people that I had counted on for 15 years to help me with my career, help METALLICA, take care of my money, do all of those things, told me, 'Your new project is fantastic, we'd like to help you with it.' James heard about it, the manager calls me back a couple of days later — 'Sorry we're not going to be able to help you with that ECHOBRAIN thing.'"