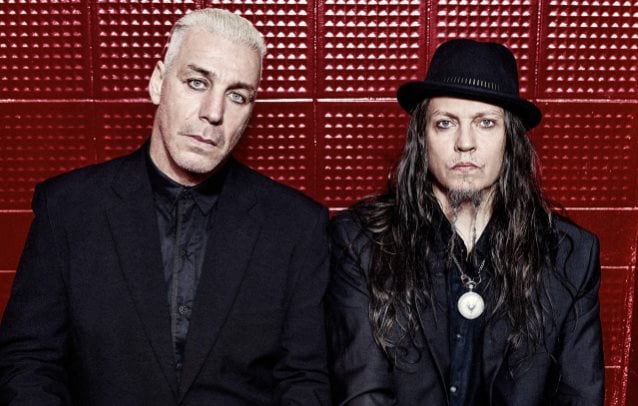 Asked how the idea for the project first came about, Peter said: "In 2013, Till invited me to a festival in Sweden that RAMMSTEIN was headlining. When I got there, he said, 'Hey, I'm going to have two years off. I want to write some music with you.' I said, 'Okay. Let's do it!' And that's really how it started."

He continued: "[Till] was always a fan of PAIN's music. He wanted to do guest vocals on PAIN songs, but when I was free, he was busy, and when he was free, I was busy, so it never worked out. So, finally we started to do one song, which was 'Ladyboy', and it was just like opening a funnel. The ideas just crawling out left and right and now we have 12 songs. It's insane."

Peter also spoke about Till's decision to sing in English for the first time in his career. Tägtgren said: "I don't miss the German, let's put it that way. [Laughs] His voice is so strong, I just think it's genius. I know the hardcore RAMMSTEIN fans might not be happy, but when he sings in English, you don't miss the German language. It sounds fucking killer. It's really fucking amazing."

He continued: "It was good, because some songs he started writing the lyrics first, and I got inspired by the words. I started writing music on that. He would call me and ask what I'm doing. He told me once that he was in Canada on the Yukon River and I was, like, 'What?!' And he was telling me about how he wrote lyrics for this river and how he wanted me to write a song. So, he sent me the lyrics and it inspired me to write music. That's the way we've been working together. It feels very unique. Once, he was singing into his iPhone and he sent me the file and I built music around it. That's how we got 'Praise Abort'."

According to Peter, there are already ideas for LINDEMANN's follow-up to the "Skills In Pills" album, which will be released on June 23 via Warner. "We're rolling already!" he said. "We were already writing stupid lyrics when we were drunk and shit. We're going at it. We're going to go as long as we have inspiration. Maybe it stops at five songs but at least we have half an album done, you know? It's just so easy to write music together. No pressure. We do it because we can."