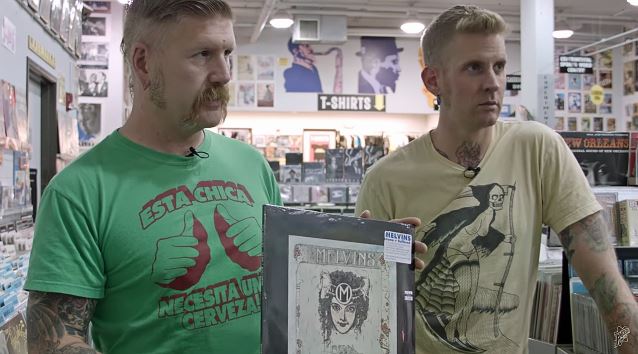 Guitarist Bill Kelliher and drummer Brann Dailor of Atlanta progressive metallers MASTODON are featured in Amoeba Music's "What's In My Bag?" segment in which they talks about some of the records they are into. In the clip below, they can be seen shopping at Amoeba in Hollywood, where they pick up music by RUSH and MELVINS, among others.

MASTODON's latest album, "Once More 'Round The Sun", sold around 34,000 copies in the United States in its first week of release to land at position No. 6 on The Billboard 200 chart. The record arrived in stores on June 24, 2014 via Reprise Records.

"Once More 'Round The Sun" was recorded in Nashville with Grammy Award-winning producer Nick Raskulinecz, who is known for his work with RUSH, DEFTONES, FOO FIGHTERS and ALICE IN CHAINS.