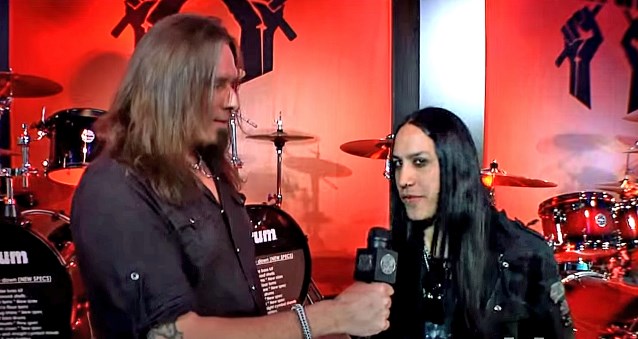 Speaking about MORBID ANGEL's upcoming activities, Tim said: "I've been in MORBID ANGEL for freakin' five years — half a decade — and we're working on some material to do a new album hopefully sometime… Maybe start it at the end of this year."

MORBID ANGEL frontman David Vincent told Planet Mosh TV last month that the band is "done [touring] for awhile" and that "it's time to write" material for the follow-up to the band's 2011 album "Illud Divinum Insanus".

David also addressed the mixed fan reaction to "Illud Divinum Insanus", explaining: "Listen, I thought a lot of that stuff [that ended up being on the record], it was really interesting to me as well. Trey [Azagthoth, guitar] came in and he had some crazy ideas. And I [said], 'Great. Let's have fun with it.'"

He continued: "We're not really a traditional band; we sort of follow our own path. And it is what it is. I mean, it's always been that way with this band. Most of our records sound different than everything that's ever been out there, [and I think that's] good. I don't wanna sound like everybody else."

Vincent added: "Listen, I've said it before. I'm not very good at being anybody else, but I'm pretty good at being me. So I'll stick with what I know."

"Illud Divinum Insanus" sold around 3,600 copies in the United States in its first week of release to enter The Billboard 200 chart at position No. 141. The effort marked MORBID ANGEL's first CD to feature Vincent since 1995's "Domination".