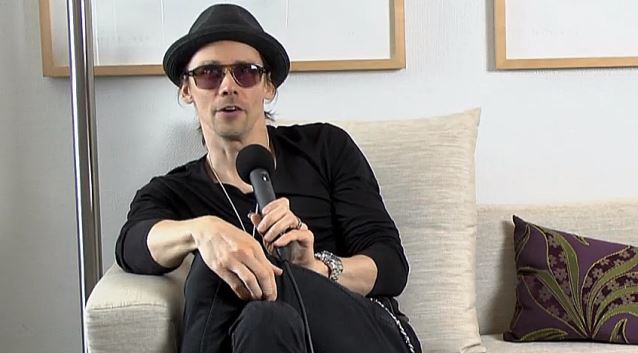 ALTER BRIDGE issues its fourth album, "Fortress", on Tuesday (October 8), which follows up the group's last release, 2010's "AB III". During the break, singer Myles Kennedy toured as part of Slash's solo band and also performed all the vocals on the ex-GUNS N' ROSES guitarist's second solo effort, last year's "Apocalyptic Love". The Pulse Of Radio asked Kennedy how singing for ALTER BRIDGE is different from working with Slash. "Vocally, each band brings a different approach out," he said. "The feel of the music will dictate that. With Slash, there's definitely more of a bluesy, soulful vibe that just naturally happens. With ALTER BRIDGE, because it's got more of a metal undercurrent, I think there's something that just happens there as well. But the nice thing is is that it allows you to stretch in two different directions."

Guitarist Mark Tremonti recently told Music Radar that the quartet did everything they could to make the new disc as unpredictable as possible, explaining, "We messed with time signatures, tones, key changes. Everything we could throw at these songs, we did. They have you never knowing what you're getting next."

The first single from the new album is called "Addicted To Pain".

ALTER BRIDGE next jets off to Europe for a month of shows starting on October 16, ending in mid-November. Full North American tour plans are still to be announced.