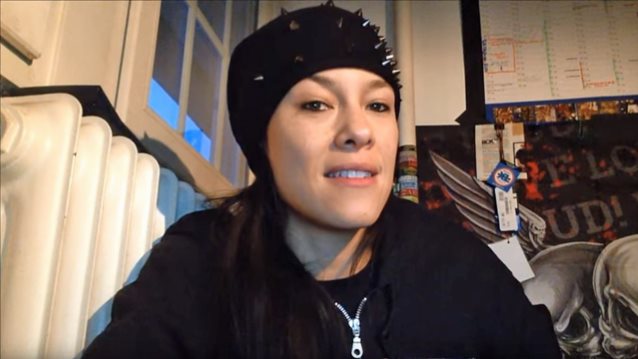 New EVANESCENCE guitarist Jen Majura has weighed in on last week's incident when ex-PANTERA singer Philip Anselmo made a "white power" gesture onstage at a concert.

Anselmo performed the PANTERA classic "Walk" at the January 22 "Dimebash" event at the Lucky Strike Live in Hollywood, California in honor of his former bandmate, late PANTERA guitarist "Dimebag" Darrell Abbott. As he left the stage, he made a Nazi-style salute. He appeared to say "white power" as he made the gesture, but he later claimed he was referring to drinking white wine as part of an "inside joke." Anselmo has since released a video message, saying that he "deserves completely" the "heat" that he has been getting over his actions and claiming to be "a thousand percent apologetic to anyone that took offense to what [he] said."

Several notable musicians have come out and criticized Anselmo for his actions, including MACHINE HEAD frontman Robb Flynn, who uploaded an eleven-minute video response to the incident in which he called Anselmo a "big bully" and described Philip's behavior as "fucking wrong."

Now Majura has offered her opinion, posting a two-minute video message in which she says Anselmo "behaved like a stupid dork with a very, very asshole-like attitude" and calls his "white wine" excuse "lame."

Majura said (see video below): "I've never been a big fan of reaction posts or YouTube comment videos and stuff like that, but after I saw this, I can't just shut my trap and say nothing. Especially me, as a half-Asian living in Germany, I just have to say something now.

"Metal, from my personal understanding, is more than just music; it's a lifestyle. And ever since I got [into] the metal scene, it's always been like a friendly community. You never experience hate stuff going on from metalhead to metalhead, like, 'Ewww… You're listening to SLIPKNOT. How can you do that? I hate you for it. Now you will have to listen to… whatever.' Stuff like that doesn't happen in metal. And I think especially the topic racism has absolutely no point in metal, in music, in life, on stage, backstage, wherever; there should be no point at all for this topic. I mean, we're living now, not, like, a hundred years ago.

"PANTERA had always been a big, big influence for a lot of musicians, and they still have a lot of young people following them. Obviously, this band has a front dude who is behaving like a stupid dork with a very, very asshole-like attitude. And I'm not afraid to say that, because it's just wrong. You can't be on stage and behave like that with that greeting and 'white power.' And then, even afterwards, telling something about white wine? That's lame. That's lame. That's stupid. And it's not correct to behave like this. So if this is his real opinion and his real way of thinking, I just have one thing to say: Phil Anselmo, fuck you!"

Majura made her live debut with EVANESCENCE last November. She has previously played with the German metal bands EQUILIBRIUM and KNORKATOR.