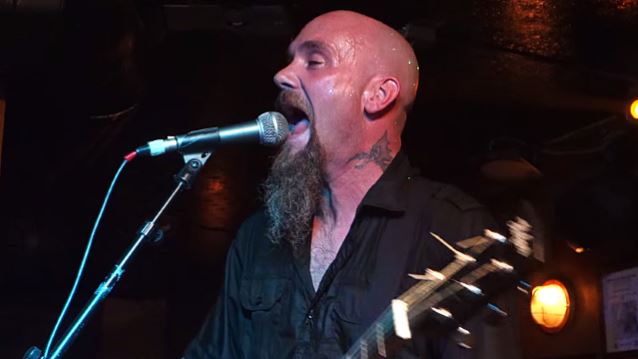 Ex-QUEENS OF THE STONE AGE bassist Nick Oliveri will rejoin his former band for a six-song encore set during their Halloween show (October 31) at The Forum in Los Angeles, Calfornia.

Speaking to NME.com, Oliveri said: "[QUEENS OF THE STONE AGE mainman] Josh [Homme] asked me to come up and do six songs with QUEENS, like an encore set. A reunion, but not a reunion. I'm going to get up and play some bass and sing some songs at the end of the show. It should be an interesting night."

Asked whether his appearance at the show will lead to him rejoining the band on a permanent basis, Oliveri said: "That's pretty much up to Josh. It's his band, and when he pulls the trigger on something, it's up to him. I put myself out there a few different times in the past 10 years at QUEENS shows. I'd go and see them play and say, 'Hey man, I'm here! Do you want me to sing a song?' I stopped asking him after a while, and then he asked me! It's pretty much just when he wants to do something, these days. It's not up to me, is what I'm saying."

He added: "I always put myself out there, and so finally he came up with this Halloween date. First he asked for my band to open up, and I said yeah. Then he got back to me and said: 'At the end, do you want to do some of the old songs?' I was like, 'Sure, man! Let's do it!' It should be a very fun and interesting night."

Homme fired Oliveri in 2004 after growing personal tensions between the two finally boiled over. By late 2012, however, it seemed as if much of animosity between Oliveri and Homme had subsided, with Oliveri inviting Homme to guest on a MONDO GENERATOR track, and then, later that spring, Homme inviting Oliveri to contribute to QUEENS' "…Like Clockwork" song "If I Had A Tail".

In April 2014, Oliveri and Homme reunited once more, as Oliveri joined QOTSA during their gig at Portland's Keller Auditorium, marking their first live show together in over a decade.