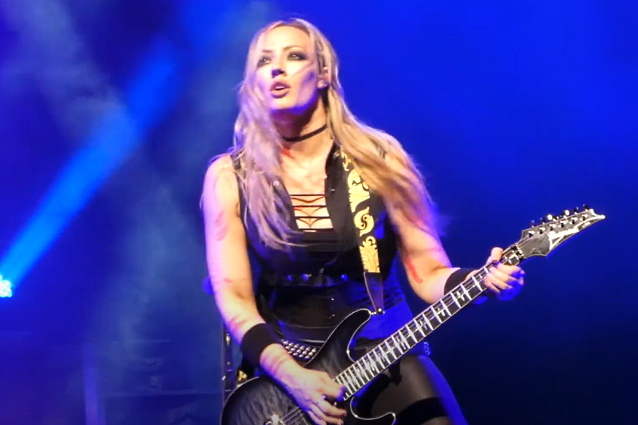 Nita Strauss, the guitar shredder for the ALICE COOPER band, escaped relatively unscathed after getting by a flying broken cane piece during the legendary rocker's concert Thursday night (October 7).

The incident took place while Cooper was performing "Feed My Frankenstein", the first song of his set in Charlotte, North Carolina. At one point, Alice tapped his cane on the stage and a piece of it broke off and ricocheted backwards, hitting Nita on the head.

Strauss later poked fun at the episode, sharing video of the mishap and writing in an accompanying message: "When I joined the @alicecooper band in 2014, he gave me the same promise he gives all the touring band members: 'You're going to see the world, you're going to get paid, and you're going to get stitches.' He left out 'oh and you may get brained by flying broken cane pieces from the first song'".

She added: "All in a day's work on an Alice Cooper tour. No real harm done".

Earlier this year, Cooper said that he makes three promises to anyone that joins his band. "I always tell the band, 'I can guarantee you three things: You're gonna get paid. You're gonna see the world. You're gonna get stitches,'" he said during an appearance on the "Metal From the Inside" podcast. "Everybody in that band has had stitches."

Cooper explained that injuries might happen during his critically acclaimed stage show.

"I've got switchblades, I've got swords, I've got everything up there," he said. "And I'm a little bit freewheeling. I don't necessarily look to where everybody is. And every once in a while, they walk a little bit close and get nicked. And those are not rubber swords."

Strauss has been playing with Cooper since 2014 when she replaced Australian musician and former Michael Jackson player Orianthi. She joined Alice in time for a mammoth MÖTLEY CRÜE tour. She was recommended to Cooper by the legendary rocker's former bass player and WINGER frontman Kip Winger.