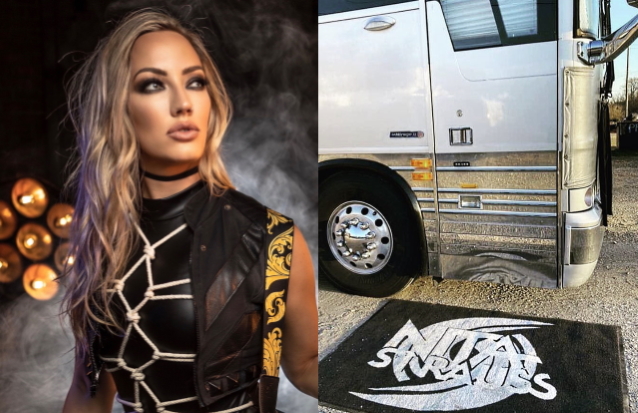 Nita Strauss, the guitar shredder for the ALICE COOPER band, is pleading for the return of a custom-made mat that was stolen in Spartanburg, South Carolina Friday night (December 3).

Earlier today, Nita shared a photo of the mat laid out at the entrance to her tour bus, and she included the following message: "We got this tour bus mat as a sweet gift from Josh's [Villalta, Nita's longtime boyfriend and manager] brother at the start of this tour a few weeks ago. The tour has been amazing and we love doing it, but it hasn't been an easy time out here, and little things like this go a long way toward making us feel special. Last night someone stole it from outside our bus at @groundzerovenue.

"In a time where bands are sadly getting their equipment and gear stolen and can't continue their tours, this doesn't seem like a big deal. But it was important to us, and sentimental. The display guitar picks that were taped down on our merch table were also stolen during the show. Sucks that some people feel entitled to just take things that aren't theirs.

"If anyone in the Spartanburg area hears someone bragging about the cool new mat they scored at my show, please let them know it would mean a lot to us for it to be returned".

In October, Nita shared "Dead Inside", her first new music since the release of her critically acclaimed debut solo album "Controlled Chaos" in 2018. The track is her first-ever solo collaboration with a vocalist, David Draiman, frontman of Grammy-nominated rock icons DISTURBED.

Strauss has been playing with Cooper since 2014 when she replaced Australian musician and former Michael Jackson player Orianthi. She joined Alice in time for a mammoth MÖTLEY CRÜE tour. She was recommended to Cooper by the legendary rocker's former bass player and WINGER frontman Kip Winger.

Nita released "Controlled Chaos" to mass acclaim from fans and media alike, with Metal Injection calling it "a great debut that — as its creator intended — leaves no doubt", and Guitar World stating "'Controlled Chaos' is a panoramic view of Nita Strauss's many strengths". To date the album has clocked up 6.7 million streams worldwide, with music videos for singles "Our Most Desperate Hour", "Pandemonium", "Alegria" and "Mariana Trench" generating over 3 million YouTube views.