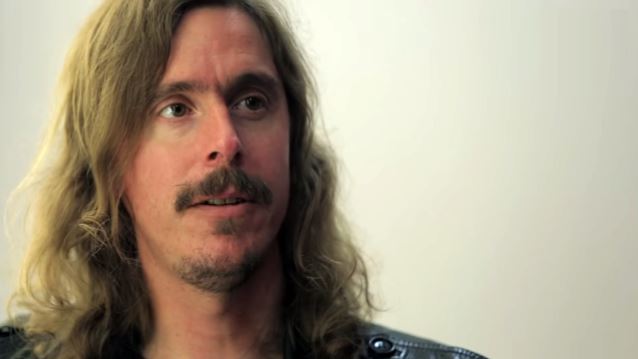 Australia's The Rockpit recently conducted an interview with guitarist/vocalist Mikael Åkerfeldt of Swedish progressive metallers OPETH. A couple of excerpts from the chat follow below.

The Rockpit: Do you find that maybe (compared to) the responses on the last few albums that on [the latest OPETH CD, "Pale Communion"], [fans] are maybe finally starting to come around and understanding where you are going with the music?

Mikael: Yeah. I mean, I do understand and appreciate that "Heritage" was a little bit of a shock to fans who are more into the heavy, death metal type of sound, and maybe it's a bit much to expect them to take it all in so we got a bit of shit for that record. I love that album with a passion, because, for me, it was natural, but I have seen that with the coming of the "Pale Communion" record that people come up to me and say, "I did not like 'Heritage' when it came out, but when you put out 'Pale Communion' I finally understood 'Heritage' and now I'm starting to like it." So I'm hoping it's going to escalate into a love for that record. People have been more gentle with us with "Pale Communion" coming out, but there is still... Like, I don't have social media, I don't correspond with the fans in that sense, so I don't really get a lot of the confrontations about what the hell we are doing. My overall response to that question would be that people might be getting used to and maybe understand a little bit better about what we are trying to do. And, for me, that is good, of course. I never had a problem. For me, it was never a big step. For everybody in the band, it was not a massive thing for us to do "Heritage", but I do accept that it might have been too curvy of a curveball for people who are not in the band, but now it's starting to calm down a little bit.

The Rockpit: I'm not really sure where the big surprise amongst the fans come from, to be honest, because OPETH has always been one of those bands that have been about trying new things and going in different directions and "Heritage" is just one of the many things that you guys do. I think it's a great thing!

Mikael: Yeah, well, me too. It's essential for this band. I mean, it's really important for us if we're going to put out a record, we'd better stand behind it. And "Heritage", even if it's a different-sounding record, we tried, or I tried, writing songs that were more linear to the sound that people are familiar with when it comes to OPETH. But I didn't feel it; it wasn't in my heart. The songs weren't bad or anything like that, but they were not right; there was something lacking in those songs and what was lacking was the belief from the other guys when I played it to them. They were, like, "Eh, not sure about that," so we needed a change, and we did change a little bit, and what happened was we kinda found our way back into writing songs the way I should be writing songs. And that's without boundaries and without thinking of commercial success and without thinking of whether we're doing what we are supposed to do like what the fans expect basically. So we put together with "Heritage" and "Pale Communion" and every record in our discography that has been done, they have been written under the same premises, and that's us basically writing music that we want to hear.

The Rockpit: Yeah that's right I think that's the only way to go about it is to be just completely honest with yourself and I think eventually the fans will come around and go, "Yeah, at least they're honest about it." Whether they like it or not is another thing, but at least the honesty is still there.

Mikael: Yeah, I think it would have been bad for us to do another so-so type of record that follows the style of "Watershed" and "Ghost Reveries". It would have been impossible, for one, but I think it would have been really bad for our career, and for us as musicians, as a band, to put out a record that we didn't believe in, even if it sounded like the OPETH that people are accustomed to. So it was really important for us to make this change now. And, like you said, I'm hoping that people are going to learn to appreciate what we're doing now, and perhaps by that time we're going to change again into something even more outrageous.

Read the entire interview at The Rockpit.