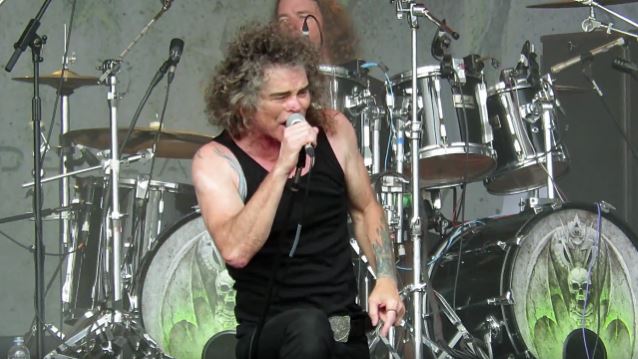 Shredload.com recently conducted an interview with vocalist Bobby "Blitz" Ellsworth of New Jersey thrash metal veterans OVERKILL. You can now listen to the chat using the SoundCloud widget below. A couple of excerpts follow (transcribed by BLABBERMOUTH.NET).

On whether he would ever consider making a documentary about OVERKILL and his opinion of founding OVERKILL drummer Lee "Rat Skates" Kundrat's "Born In The Basement" film:

"Sure I would, but not while we're still doing this. I think that you get a pretty good idea of where our head's at. We do this 'cause we like to do it, we do it because we think it's dangerous, we do it because it gets our blood going. I think that once you start making it historical, it has less contemporary value; it's about what was. And sure, those songs from the early days where we got our start, when Rat was involved — 'Feel The Fire', 'Taking Over' — they're still played to this day, but they're played with the contemporary vibe of Ron Lipnicki on the drums, Dave Linsk on guitar and Derek Tailer on guitar, so they take on a new face, they take on… an OVERKILL in 2015 as opposed to OVERKILL 1985. And I think that that's our winning formula — is to not document what we were, but to show you what we are. And so, would I do it? Sure. But, in my opinion, I'd rather not do it while I'm still touring… I mean, a little bit here and a little bit there is one thing, but doing a full documentary about what happened with the band and 'this is the way it is' and 'this is my feelings'… I mean, it was obviously Rat's right to do so — he was there, and that's how he remembered it. Did I like it? I was actually pretty interested in it. I mean, he would have used my name instead of calling me 'the singer.' [Laughs] It might have been nice… I don't really have criticisms of it; that's how he saw it. And if you put all four of us in the same room, we'd probably have different stories, to some degree."

On whether he would ever consider writing a book:

"I don't know. if I did, I wouldn't do it with all the turmoil and 'this guy fought that guy.'… I mean, I have thirty years of funny stories, man — some really funny shit. And I think I would do that as opposed to, 'Oh, we started here, and this is where we recorded and we went in, and this is how I felt, and that guy was not… This guy was a great guitar player and he had a great riff.' I wouldn't do that. I think I would just do something that was short stories. You know, 'this happened in this era,' and 'this happened in that era.'"

On OVERKILL being called the "MOTÖRHEAD of thrash":

"I've actually heard that before, and I'm honored by it, because, I mean, I'm a huge fan, as is obvious. I mean, the name of the band. I mean, for God's sake. And so are the rest of us. D.D. [Verni] is a Lemmy protégé, to some degree, with regards to playing the bass. [Lemmy] is one of his all-time faves with regards to presentation and songwriting. So I don't know if I would say that, but, for sure, there seems to be a certain consistency and maybe something more than just being fans of theirs that we've taken not knowingly, but it's probably come into us, some of that attitude where [we feel], 'Who cares what other people think? Let's do what we like to do best.' And it seems to work for us. So I've always admired them, and I remember touring with them more than once. In the early days, I would always feel like, 'Geez, I don't wanna meet these guys, where I have their whole discography, because maybe I'll be disappointed.' And that was never the case with MOTÖRHEAD; they were always forthright, righteous dudes, 'C'mon in. Have a beer. Let's talk music. And do you wanna hear the new demo?' And I thought to myself, 'What fucking great dudes?' If you give me one tenth the guy that this guy is, I'd be a happy man and doing what I do. So, sure, I suppose there's some of the same principles and same ideology, but I never think of us as that; I think of us more as OVERKILL is OVERKILL."

OVERKILL's first worldwide release on Nuclear Blast will be a special box set comprised of the band's entire back catalog, due out on September 18. Titled "Historikill: 1995 - 2007", it will contain 11 OVERKILL albums on 13 CDs and a bonus CD (containing demos, remixes and an unreleased cover song) in digi sleeves.

OVERKILL and SYMPHONY X will join forces for a North American tour in September/October. The 24-date co-headlining trek launches at The Palladium in Worcester, Massachusetts on September 18, hits four Canadian cities, then wraps up with a very special night at Terminal 5 in New York City on October 17 — the first time in the bands’ combined histories that they'll play a show together in their own backyard.

OVERKILL's latest album, "White Devil Armory", sold around 8,400 copies in the United States in its first week of release to debut at position No. 31 on The Billboard 200 chart. The CD was released on July 22, 2014 in North America via eOne Music and on July 18, 2014 in Europe through Nuclear Blast Records. The effort was tracked at Gear Recording and was mixed by Greg Reely, who also worked on 2012's "The Electric Age".