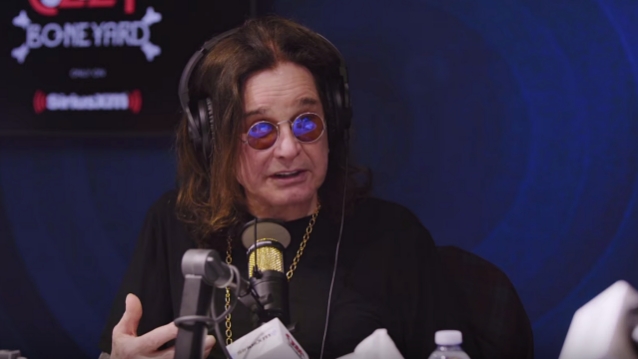 This past April, Ozzy Osbourne postponed all his 2019 tour dates, both in North America and Europe, as he recovers from an injury sustained while dealing with his recent bout of pneumonia. The BLACK SABBATH frontman fell at his Los Angeles home, aggravating years-old injuries from his 2003 ATV accident that required surgery.

During an appearance on SiriusXM's Ozzy's Boneyard, Ozzy spoke to close friend Billy Morrison about his recent health issues and his recovery. Ozzy said (see video below): "It's been one of the most fucked-up years of my life. I broke my neck in January, I had pneumonia, I've had fucking blood clots… It's been an eventful year, to say the least. I have been in such pain this year.

"I was doing that farewell tour, and it was going great," he continued. "I was singing better than I've sang [in a long time], and I was really happy. I went home for a short break and I got two staph infections in two of my fingers. God knows how that happened. That cleared up. Then I did the New Year's Eve show at the Forum here in Los Angeles. That was the last gig I did, 'cause the following February, I went for a bathroom break in the night and lost my footing. I hit the deck like a fucking ton of bricks."

Elaborating on the most recent incident where he required surgery, Ozzy said: "I don't know if you remember, a few years back, I had a quad bike accident. I'd done some damage there, but they just patched me up. For the last 10 years, I've been getting electric shocks down my arm. So when I fell down just after New Year's Eve, I was lying there and I said, 'Well, you've fucking done it.' So then I said to Sharon [Ozzy's wife]… She goes, 'What are you doing?' It was two o'clock in the morning. I said, 'I think I broke my neck.' She goes, Oh, go and get back in bed.' I said, 'No. Call an ambulance.' So that was it."

Ozzy was in a coma for eight days in December of 2003 when he accidentally crashed an ATV while riding on the grounds of his English estate. He broke his collarbone, several ribs and a neck vertebra in the incident, of which he told The Pulse Of Radio he had very little memory.

Most of the 2019 shows on Ozzy's last full world tour have been rescheduled beginning in February 2020. Fans are being asked to hold on to their original tickets, as they will be honored for the rescheduled dates. Because some of the 2019 dates were festival appearances, not all will be rescheduled.