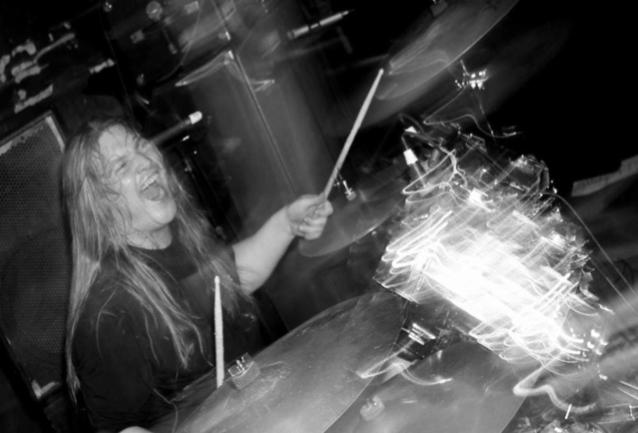 "Low Blow", a previously unreleased song from RIGHTEOUS FOOL, the band featuring late CORROSION OF CONFORMITY co-founding drummer Reed "The Mule" Mullin on drums and vocals, can be streamed below.

Mullin passed away on January 27 at the age of 53. The news of his loss continues to stun the hardcore, punk, and metal communities, all of which Mullin inadvertently influenced not only by the lasting impression of his drum prowess but with a universally captivating personality that seemed to warm the souls of all those he crossed paths with.

RIGHTEOUS FOOL was a trio featuring Mullin alongside CORROSION OF CONFORMITY bassist Mike Dean, and guitarist Jason Browning, who all shared vocal contributions. The band released one two-song seven-inch in 2010. The track "Low Blow" was recorded in 2011 at Studio 606 in the San Fernando Valley with the intention to be included on a debut full-length that never came to fruition. The stream serves as a tribute to Mullin on what would have been his 54th birthday (February 12).

"Reed was talking to Jason a few weeks before he passed away and mentioned a song called 'Low Blow' that he regretted not releasing," relays Dean, "It was the standout for sure and really showed his potential as a singer."

Writes Rolling Stone: "Although best known as a drummer, Mullin was also an accomplished vocalist and lyricist — contributing about half the vocals to CORROSION OF CONFORMITY's 1985 punk-metal landmark 'Animosity' — and the drummer sings lead here. He belts out his words in a gritty yet melodic wail that perfectly complements the song's mean, bluesy swagger. Although the music comes from Studio 606, the Mullin vocal that appears here comes from a demo the drummer had made, which he felt he couldn't top."