The 2020 tour was due to start in Italy on May 24, with the itinerary also including a massive run of 10 London O2 concerts as well as a pair of shows each in Manchester and Birmingham, before further mainland Europe dates were set to conclude with two Madrid shows on July 7 and July 8.

The decision has been made with the safety of QUEEN's audiences, band, crew and venue staff in mind and with close on 400,000 tickets sold across the tour, was not a decision taken lightly.

All tickets will be valid for the rescheduled show dates. Ticket holders are advised to contact their point of purchase for information on ticket exchanges for the 2021 dates.

The postponement comes as a major disappointment for the band having only recently enjoyed performing one of their biggest ever tours with their massively successful six-week stadium tour of South Korea, Japan, New Zealand and Australia, playing to audiences reaching up to 60,000 a night. The trek also included a special appearance at the Sydney Fire Fight Australia benefit concert for bushfire relief, for which the band reprised their iconic 22-minute Live Aid set, helping raise $9.5 million to help those affected by Australia's massive bushfires.

Addressing fans, Brian May said: "We're very sad to announce the postponement of our summer shows in Europe, although, in the present crazy state of the world, it cannot be a surprise to our fans. Those incredible scenes at our concerts just over a month ago now seem like an impossibly distant dream. We were so lucky to be able to complete that tour, running just ahead of the wave that was about to break on us. I know many of our fans are having similar moments of disbelief and bewilderment out there. Of course, we would have gone ahead with the dates had it been humanly possible. The good news is that we do NOW have a PLAN B ready to roll. If you hold on to your tickets they will be valid for the rescheduled shows. God willing, we will be there with bells on!"

Drummer Roger Taylor responded to the postponement saying: "We're all in this together. Devastating! Boringly frustrating! Scary and upsetting! But...pick ourselves up, dust ourselves down...start all over again!!! Be well....take care...coming right back at you as soon as we possibly can!!!"

Singer Adam Lambert added: "I am very disappointed that we won't be touring Europe as planned, but we have to look after each other and put everyone's health first. Look forward to getting out there when it's safe."

At the same time as making this announcement, the band also highlighted its recently launched #DontStopUsNow initiative which is aimed at encouraging fan interaction, saying: "Finally, a thank you from us! Our hearts have been warmed by the growing influx of QUEEN-inspired videos from fans and supporters from all over the world in recent days. Keep them coming and we will highlight as many as we can across our social channels!" 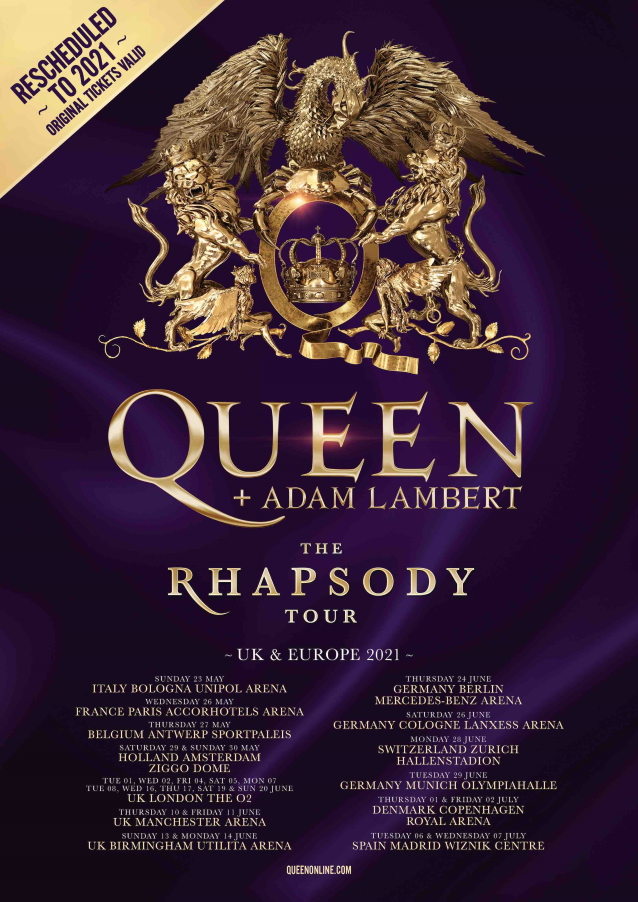