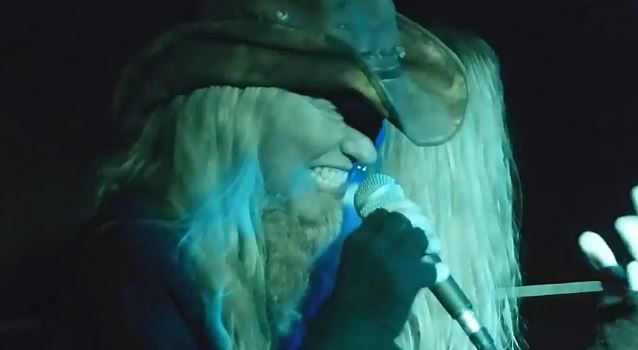 Fan-filmed video footage of SANCTUARY's March 3 performance at The Underworld in Camden, London, England can be seen below.

SANCTUARY's European tour started with a very special headline show in London before they join the mighty OVERKILL for a run of mainland shows. The trek will end with two headlining gigs in Greece.

Said SANCTUARY guitarist Lenny Rutledge: "Nick is an amazing musician and we believe he will bring a fresh energy to the lineup. You can see Nick Cordle with SANCTUARY this March touring Europe on the Killfest tour."

Added Cordle: "It'll be a great pleasure to join SANCTUARY on tour in Europe! I've admired the band for a long time and [SANCTUARY's new album] 'The Year The Sun Died' is a breath of fresh air. It's a welcome challenge to work up these songs and I'm excited to get moving!"

In 2010, four of the founding SANCTUARY members — Warrel Dane, Jim Sheppard, Lenny Rutledge and Dave Budbill — came together for a few select reunion performances. At first, it was just going to be a handful of shows, but the response and chemistry on stage was so overwhelming that the guys changed their minds. Now, some 20 years after they left off, SANCTUARY has continued with its unique mix of U.S. power metal, hard rock and progressive elements.

SANCTUARY released the classic albums "Refuge Denied" and "Into The Mirror Black" during its short existence between 1985 and 1992. Following the band's split, Dane and Sheppard formed NEVERMORE.