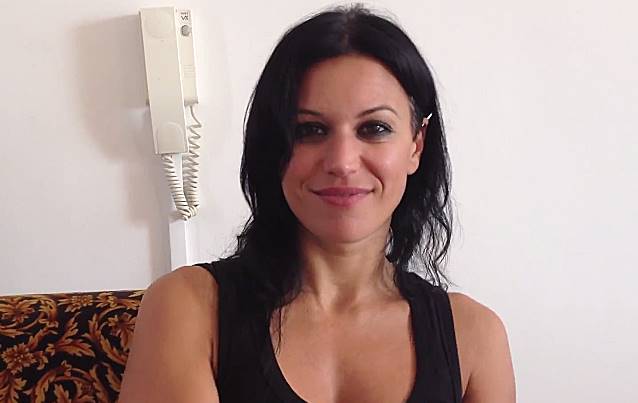 Italian heavy rockers LACUNA COIL will hit the road as a quintet later this month as part of "The Hottest Chicks In Hard Rock Tour" following the departures of guitarist Cris "Pizza" Migliore and drummer Cristiano "Criz" Mozzati. Marco "Maus" Biazzi will handle all guitar duties on the trek while drummer Ryan Blake Folden will once again sit behind the kit for the tour. The band states: "Fans will already be familiar with Ryan, as he performed live with LACUNA COIL on the majority of the 2012 and 2013 'Dark Legacy' and 'Dark Adrenaline' tours."

Regarding the departures of Migliore and Mozzati, LACUNA COIL singer Cristina Scabbia said: "I know it feels weird the fact that we chose Valentine's Day [February 14] to release the news that Chris 'Pizza' Migliore and Cristiano 'Criz' Mozzati decided to leave the LACUNA COIL family. But it all makes sense when at the base of this choice there is still a huge amount of love. Love for us six as a strong group of good friends, love for what we have been able to achieve in so many years together. Love for LACUNA COIL.

"I believe this being the most friendly split (I cannot even call it so, cause it sounds bad) happened to a band. Not a fight, no ego problems, no anger: a decision taken in the most serene way from Criz and Pizza and fully accepted from the rest of LACUNA COIL.

"No, you will not read any angry articles on Blabbermouth, sorry :))

"We know we left some of you heartbroken with the news and surely Andi [singer Andrea Ferro], Maki [bassist Marco Coti Zelati], Maus and I are gonna MISS THE HELL out of our brothers (even though we will still see each other off stage :)))!!) , but don't take this all as a sad news because Criz and Pizza are serene in their decisions and the rest of us are absolutely, completely, totally determined to bring you guys the most sincere and great album we did so far, 'Broken Crown Halo', and keep the LACUNA COIL legacy going.

"Are you ready? We definitely are and have NO intention to stop.

"Are you with us?

"NOTHING STANDS IN OUR WAY."

In an interview with U.K.'s Metal Hammer, Scabbia elaborated on Migliore and Mozzati's exit from the band. "It's something we announced [on Friday] but knew for a few weeks, and honestly, I feel good, because we couldn't have a better — I don't even wasn't to use the word ‘split'; that sounds like, 'Oh, we had a big fight and we don't want to see each other anymore,' she said.

"It was something that was coming from the heart, very sincere. They just decided they wanted to change their lives. It's not like they didn't like the band anymore, but this lifestyle is not easy. You're on tour all the time, you don't have any private life anymore.

"Being on tour is really surreal, because time moves in a different way, so I think it's absolutely normal that after so many years together, some of us want to carry on doing what we do because we still enjoy it, and some of us would want to move on, keeping the great memories we have together. I mean, they're not planning to join other bands. It's not going to be a huge difference, because we will have the same songwriter, and we are determined to go on. So I'm sad that they're leaving, but we will continue seeing each other outside the band. They are happy, we are happy, everyone is happy."

She continued: "The drums [on the U.S. tour] will be played by Ryan Folden, who played with us for the last year while Criz was at home growing up his kid. And for guitar we are going on with Marco only, and then we will decide.

"I posted the news [on Friday] and I got 25 private messages in half an hour from people that wanted to do auditions. But we're not doing any auditions.

"It's too early to think about replacements, and we don't even know if we want that. We might work with session musicians for a while, because even if we are serene and happy, it's hard for us, because we lost two brothers, so we don't want anyone to come into the family just like that. It would be wise, I think, just to go on with us four and then move on with friends like Ryan, who is a great drummer and very easy to get along with. And that's an important factor, because if you're going to share a tour bus with people, you have to be able to get along with them!"

"Broken Crown Halo" is LACUNA COIL's seventh studio effort, and the highly-anticipated follow-up to "Dark Adrenaline", which was released in January 2012 and saw the band tour with acts including MEGADETH, MOTÖRHEAD, VOLBEAT and SEVENDUST after debuting at No. 15 on The Billboard 200 album chart.

The song "Nothing Stands In Our Way" can be streamed using the SoundCloud widget below.

"Nothing Stands In Our Way" audio stream: