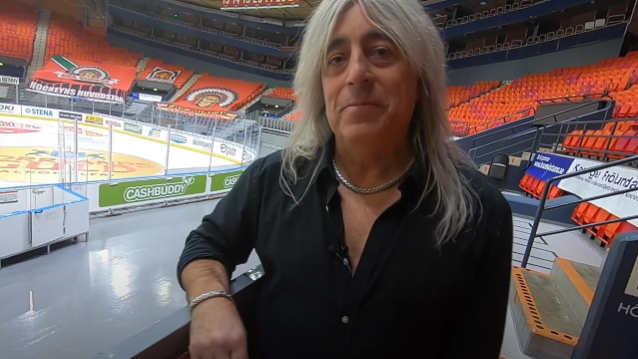 Former MÖTÖRHEAD and current SCORPIONS drummer Mikkey Dee received the honorable title "Gothenburger Of The Year" in his hometown of Gothenburg, Sweden on Saturday, November 27.

"Gothenburger Of The Year" is an honorary title awarded to a resident of the city who has gained special distinction during the year and acted in a praiseworthy manner that has inspired pride and given pleasure to many people.

As part of yesterday's festivities, Mikkey got his name on his very own tram. He drove 40 tons of metal to the Queens Square where he was honored in front of fans and the people of Gothenburg. The award is given by the Gothenburg city council and Gothenburg tram association.

"We, the people of Gothenburg, feel an enormous pride that we have an artist of the world of this caliber in our city," Gothenburg city officials said in a statement. "For over 40 years, Mikkey has performed with an amazing passion in some of the biggest bands in the world. He is true inspiration for all of us as well as young musicians."

Photos and video footage of yesterday's ceremony can be found below.

Dee, who has been a member of SCORPIONS since 2016, played drums for KING DIAMOND from 1985 until 1989. The Swedish-born drummer also played with MOTÖRHEAD from 1991 until the band's dissolution in December 2015.

Dee played on the classic KING DIAMOND albums "Fatal Portrait", "Abigail" and "Them" until he left in 1988 to join Don Dokken. He returned a year later as a session player on KING DIAMOND's "Conspiracy".