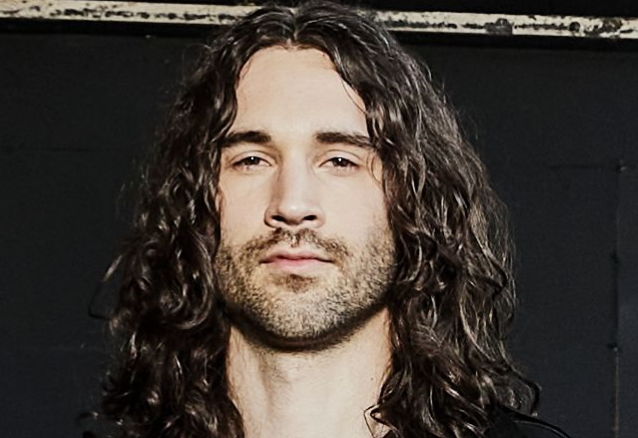 Frank Sidoris, who plays rhythm guitar for SLASH FEATURING MYLES KENNEDY AND THE CONSPIRATORS and MAMMOTH WVH, and his wife, Alexandria, were involved in a serious car accident on Saturday (October 9) en route to Los Angeles, resulting in a fracture of her L1 vertebrae and a small fracture in her right ring finger.

Sidoris described the scary crash in a post on his Instagram. He wrote: "A small pickup truck was towing a van of illegal weight on a single axle trailer without brake lights or turn signals in the middle lane of the 15 South just before Baker, CA. The driver hit his brakes on a downhill causing the weight of the van and trailer to push the pickup directly in front of us, making him completely perpendicular to the left lane we were in giving us nowhere to go except the desert median. We clipped the front of his pickup truck which sent us airborne over a drainage ditch, crashing head-on in to the other side."

He continued: "It was a truly traumatic experience, but at least we are alive and Allie's injuries are mendable through surgery and months of physical therapy. Her surgeon is one of the best there is and considering my wife's strength and how she's been an absolute superhero through everything she's gone through, I know she'll be able to bounce back with time. I'm hopeful the road ahead won't be a long one.

"Thank you to each and every one of you for reaching out and for all of the amazing support you've given us over the years during the hardest times of our lives, it means the world."

Back in June 2019, Sidoris missed the remainder of SLASH FEATURING MYLES KENNEDY AND THE CONSPIRATORS' European tour as he traveled back to the U.S. to be with his wife for her first full-on chemotherapy treatment in her battle with with cervical cancer. Cory Churko, who plays alongside CONSPIRATORS members Todd Kerns and Brent Fitz in the cover band TOQUE, filled in for Sidoris.

Frank told the Las Vegas Sun that he got a call from Wolfgang Van Halen five years ago about possibly jamming with this new band. The Vegas-based guitarist eventually got a chance to spend time with Wolfgang's father Eddie Van Halen, who passed away a year ago after a long battle with cancer.

"Playing guitar in front of one of the guitar players is definitely nerve-wracking," Sidoris said. "If we were playing for a week, Ed came down three out of the five days we jammed and he was just the best. He's such a good father, too. I just liked watching him and Wolf hang."