Knotfest, the music and lifestyle phenomenon created by SLIPKNOT, has announced the headliner for its first-ever event in Mexico City, taking place at the awesome Parque Deportivo Oceanía venue. This year, Knotfest is joining forces with Forcefest, combining two massive festival brands over one weekend. The Knotfest day will take place on Saturday, November 30, headlined by SLIPKNOT, with Forcefest taking place on Sunday, December 1, headlined by Rob Zombie. 15,000 early bird tickets have already sold out, but special pre-sales begin on June 24 at 11 a.m. CT, with tickets going on general sale at 11 a.m. CT on June 26.

Knotfest has also announced that it will be returning to Bogotá, Colombia this year on December 6, following up on the smashing success of the inaugural event in 2017. More info on tickets and lineup to follow.

As well as these international announcements, the "Knotfest Roadshow" will be kicking off its nationwide tour of North America on July 26 in Mountain View, California. The "Knotfest Roadshow" is headlined by SLIPKNOT, who will be joined by VOLBEAT, GOJIRA and BEHEMOTH. Guaranteed to be the biggest heavy tour of the summer, it hits a further 29 cities, culminating in The Woodlands, Texas on September 8.

Knotfest is the brainchild of SLIPKNOT and the band's longtime manager, Cory Brennan of 5B Artists And Media. Started in 2012, the brand has grown at an exponential rate and already seen expansion across the globe to Tokyo, Mexico City, France, Bogotá and, of course, the USA. With big plans to expand into further new territories in 2020, the cultural phenomenon that Knotfest has created shows no signs of slowing down.

SLIPKNOT is currently working its way across Europe, headlining major festivals and sold-out arena shows. Kicking off at Rockfest in Finland, the band has also headlined Germany's Rock Am Ring, followed by a triumphant headline slot at the U.K.'s legendary Download festival this past weekend and will also be headlining Knotfest France today, Denmark's Copenhell, Graspop Metal Meeting in Belgium, Mystic Festival in Poland, Volt Fest in Hungary, Download Madrid and VOA Hard Rock Festival in Portugal before heading back to the U.S. for the "Knotfest Roadshow" tour.

SLIPKNOT will release its sixth studio album, "We Are Not Your Kind", on August 9 via Roadrunner Records. Official lead single from the new album, "Unsainted", clocked up over 7.7 million streams in one week, 15.1 million streams to date on Spotify and over 26 million views on YouTube since the official music video — directed by Shawn "Clown" Crahan — was launched four weeks ago. It trended No. 1 on YouTube across all categories. 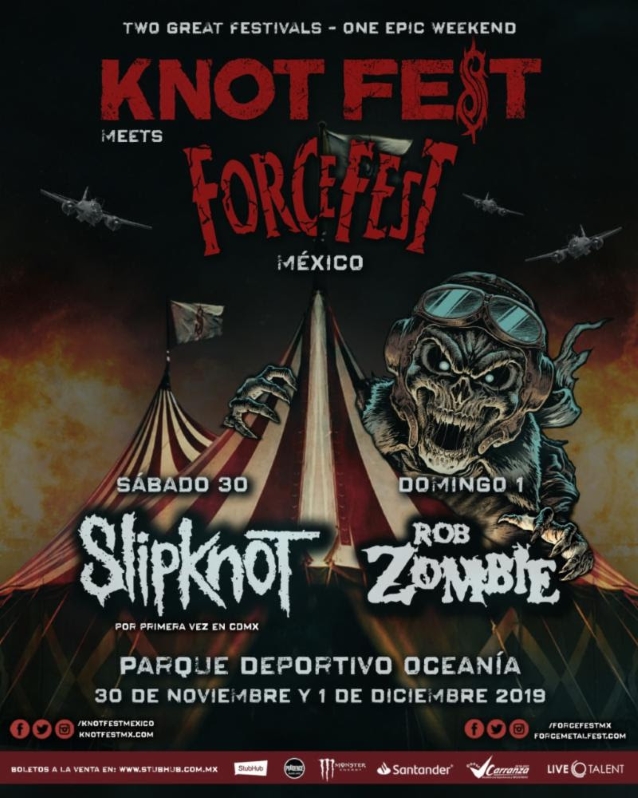