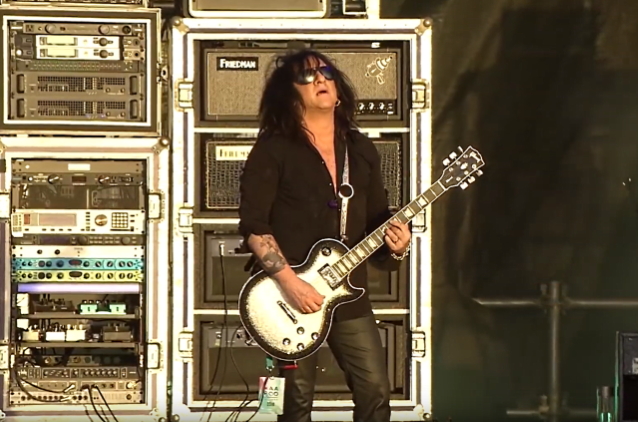 Steve Stevens is hopeful that his collaboration with Ozzy Osbourne will eventually see the light of day.

The BLACK SABBATH singer and Stevens connected through their mutual friend Billy Morrison, who plays alongside the guitarist in Billy Idol's band. Ozzy told SiriusXM several years ago that they had made a "bluesy" song with the working title "Crack Cocaine", which was originally slated to appear on Osbourne's next solo album.

Asked in a new interview with "Talking Metal" how much material he actually worked on with Ozzy, Steve said (hear audio below): "I think there's one which kind of rose to the top. I was asked to write with him by Billy Morrison, the second guitar player in BILLY IDOL. [Ozzy and Billy are] buddies, and I have a home studio. [Morrison] said, 'Can I bring Ozzy over to do some writing?' There's one song which may see the light of day. I was just happy to have [Ozzy in the studio with me]. I set up my microphone and you hear that voice and you get chills. Same as I do with Geezer [Butler, BLACK SABBATH bassist] when we are in the room [playing together with DEADLAND RITUAL] and you just play guitar and it's sitting next to that bass sound.

"I've always maintained that I'm a fan," Stevens continued. "I've never lost that kid fan thing out of the music that made me wanna do this. And I think that's what keeps me kind of always looking to get better and work with other people.

"Yeah, maybe the Ozzy thing will see the light of day," he added.

Ozzy has not released an all-new solo album since 2010's "Scream", having spent the last few years touring with BLACK SABBATH in support of that band's "13" LP, as well as playing a number of solo shows.

Ozzy has previously made conflicting statements about whether or not he intends to record a new studio album, telling The Orange County Register in 2017 that "it's not cost-effective" to release full-length collections of tracks. "You actually lose money because people aren't buying records anymore," he said. "A couple of songs, maybe I'll do that and put that out. I'll go to Sharon [Osbourne, Ozzy's wife and manager] and say, 'I want to do an album' and then I'll go to her and say, 'I don't want to do an album.' I really can't make up my mind."

A year ago, Osbourne told the Boston Herald that he was hoping to return to the studio after he completes his "No More Tours 2" farewell tour. "I have a bunch of songs written and have plenty of ideas and really want to do a new album, but as to when and how it will come together, I do not really know," he said.

In early April, Ozzy postponed all his 2019 tour dates, both in North America and Europe, as he recovered from an injury sustained while dealing with his recent bout of pneumonia. The singer fell at his Los Angeles home, aggravating years-old injuries from his 2003 ATV accident that required new surgery.