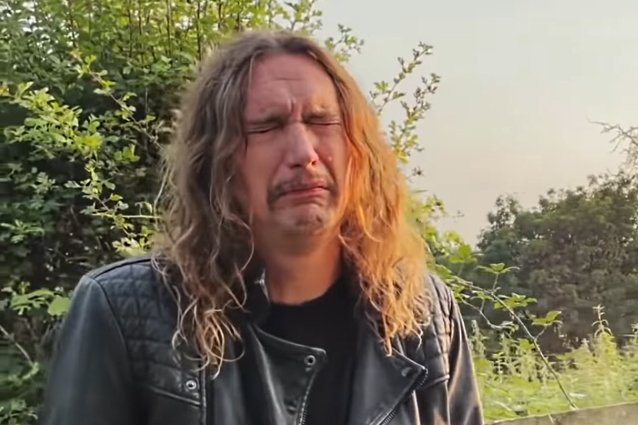 British rockers THE DARKNESS have released the official lyric video for a new song called "Nobody Can See Me Cry". The track is taken from the band's upcoming album, "Motorheart", which is due on November 19 via Cooking Vinyl.

"Motorheart" is a record of immeasurable rock and roll extravagance, and yet another masterpiece from England's favorite rock icons. It will be made available in a wide variety of formats, including standard and deluxe versions, both digitally and on CD. There's a heavyweight black vinyl album alongside limited-edition color LPs, an old-school cassette version. With exclusive bundles and signed editions to boot, it's the complete aural experience from THE DARKNESS, and a glorious addition to one of the most exciting canons in British rock music.

THE DARKNESS frontman Justin Hawkins recently told Chaoszine about what it was like making an LP during the pandemic: "The [other] guys [from the band] were writing from London, and I was working here [home] in Switzerland. And we had this thing; it's called Listento. So when I was recording my vocals, I was able to communicate with my brother [THE DARKNESS guitarist Dan Hawkins], who was producing the record from the U.K. So I'd be able to talk to him. And he'd be doing my takes. It was kind of like as a plugin on Pro Tools.

"When you think about it, if I'm in the vocal booth with my headphones on, and the producer is outside the vocal booth, it's the same level of interaction as to use Listento and be in a different country," he explained. "It doesn't really make much difference — the thousands of miles between us is irreleveant, really, because it's the same experience; I can hear his voice but I can't see his face, just like in a normal studio. So it became pretty normal, actually, as soon as the recording process started. The only difference would be in the writing — we didn't collaborate in the same way with the writing. But we all had the same manifesto going into it. We wanted to make an uplifting rock record with just good-time boogie rock on it. We didn't wanna have anything clever, nothing too metal-y, nothing too acoustic-y and nothing too… There isn't really a power ballad on this album; we normally do a power ballad. There's no sad songs on it. It sounds like an AEROSMITH album or something like that — it's just a bit of good-time rock and roll."

Asked if it was hard to get into the mood to write an uplifting album during the COVID-19 crisis, Justin said: "We didn't wanna make a lockdown album. In the beginning of that thing, there was a lot of lockdown music coming out, and it was music that was influenced and informed by the experience of the pandemic. And it's tempting to do that kind of thing, but I don't think it's our job. I think our job is to provide something else, really. Our fans wanna hear us pissing about and doing stupid [stuff]. Other people can do the other stuff; we'll just do what we do. Even if you feel sad, it's good to write a happy song, I think. There's more than one way to approach every situation, and THE DARKNESS way probably, whilst it's tempting to do serious and sad stuff, that's not what our audience wants to hear, and I don't think it's what we wanna do, really. We just wanna have a good time."

With a back catalog overflowing with sonic gold and a live reputation that most bands can only dream of attaining, THE DARKNESS have established themselves as one of the most loved and important British rock bands of our time. Their last album, 2019's "Easter Is Cancelled", became the band's fourth Top 10 album in the U.K. while also topping the Official Charts Top 40 Rock Chart and the iTunes Rock Chart, alongside receiving swathes of critical praise.

THE DARKNESS will be showcasing the live potency of "Motorheart" on their extensive 22-date U.K. headline tour throughout November and December this year. A true spectacle to behold, fans will be treated to brand new songs from the album as well as hits from across their award-winning, platinum selling back catalogue. Support also comes from BRITISH LION, the side project of legendary IRON MAIDEN founder and bassist Steve Harris.