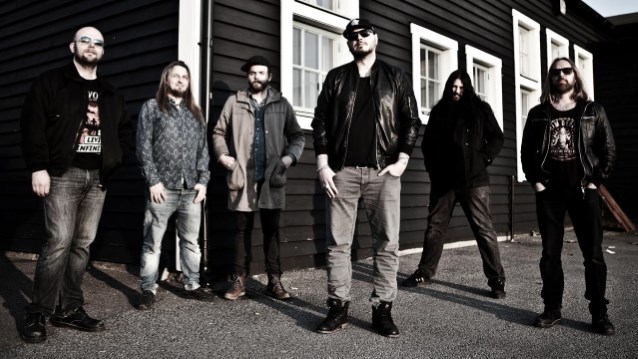 Strid talked about the upcoming album on the latest installment of Canadian rocker Danko Jones' official podcast. You can listen to the chat and a snippet of a brand new song "Living For The Nighttime" (at the end of the podcast) using the SoundCloud widget below.

THE NIGHT FLIGHT ORCHESTRA started like so many others as an innocent yet serious drunken idea when Strid and David Andersson (MEAN STREAK, session musician for SOILWORK) were on the road together somewhere in North America in 2007. Björn and David were bonding over what they considered "classic" or not, from rock and roll conspiracies to being arrested in a lobby with nothing but leather pants on. All those scenarios, fictional or real, needed a soundtrack. They also came to think that whether you're on a metal tour or not, a lot of classic rock songs say it all and can really lend you a helping hand and make you forget about everything, especially when in motion or travelling. The classic escape. The never-ending road trip. The transatlantic night flight. It may sound simple and naive, but what it all comes down to is that we all need that soundtrack to feel extra special, whether you have been arrested in a lobby or not.

It didn't take long before bass player D' Angelo joined forces as well as keyboard player Richard Larsson (VON BENZO) and drummer Jonas Källsbäck (MEAN STREAK). The goal was to reclaim the '70s/early '80s sense for classic melody, the forgotten recipe to a timeless song, preferably a song mentioning a city, street name or an exhilarating alcoholic beverage. Anything that will have you spitting out the word "classic." From "Tarot Woman" to "Badlands", from "Rhiannon" to "Running on Empty", from "Blind Man" to "Night Moves", from "Deuce" to "Separate Ways", from "Elected" to "Set me Free". The list goes on. It's all about reclaiming the "classic."

THE NIGHT FLIGHT ORCHESTRA made its live debut in August, 2013 at Dina-scenen in Lidköping, Sweden.

THE NIGHT FLIGHT ORCHESTRA is: