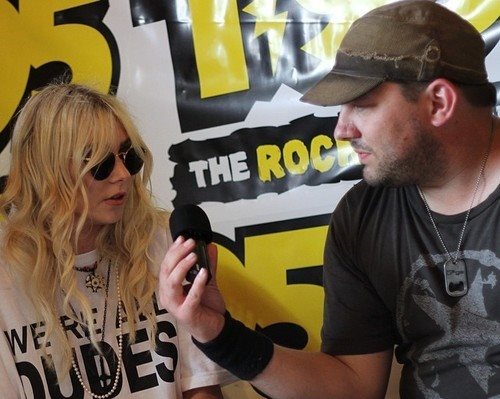 Joey Irsik of "The Rock Cow" conducted an interview with THE PRETTY RECKLESS, the band led by actress-turned-singer Taylor Momsen, at this year's Rocklahoma festival, which was held May 23-25 at "Catch the Fever" Festival Grounds in Pryor, Oklahoma. You can now listen to the chat using the SoundCloud widget below.

THE PRETTY RECKLESS' second album, "Going To Hell", sold 35,000 copies in the United States in its first week of release to land at position No. 5 on The Billboard 200 chart. The record arrived in stores on March 18 via Razor & Tie.

According to The Pulse Of Radio, THE PRETTY RECKLESS has become the second female-fronted act in the last three years to hit No. 1 on the rock radio chart. The band's latest single, "Heaven Knows", hit the top of the survey, allowing THE PRETTY RECKLESS to join the Lzzy Hale-fronted HALESTORM as part of a small and very select list of chart-topping rock acts fronted by women.

Momsen began her career as an actress when she was a child before becoming a full-time musician years later. She told The Pulse Of Radio that her family always knew this was what she really wanted to do. "They knew that music was always where I was headed, and what my — that was my passion and my goal," she said. "I mean, acting was a day job, essentially, while I worked on writing a record's worth of material that I wanted people to hear, and finding the right people to work with and the right band and all that. So they weren't surprised when I jumped ship."

The video for "Heaven Knows", in which Momsen appears semi-nude, has gotten nearly six million views on VEVO.