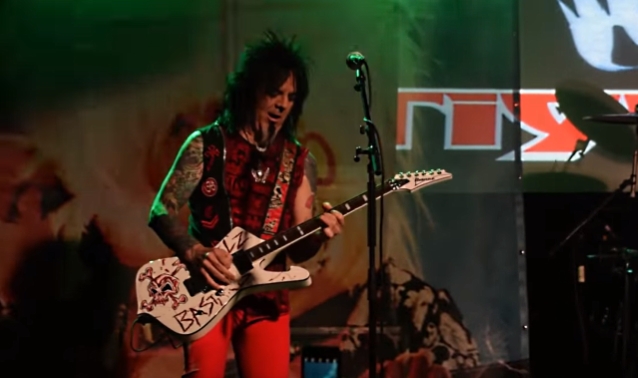 Welsh glam metal veterans TIGERTAILZ have been forced to cancel their appearance at the HRH AOR VII festival in Wales as a result of guitarist and founding member Jay Pepper's battle with hearing loss which threatens to curtail his long career.

Earlier today, Pepper released the following statement: "I'm very sad to inform you that we have had to cancel our show at Hard Rock Hell in March.

"Unfortunately, my hearing has continued to deteriorate, and has been further compounded by the onset of severe tinnitus.

"I recently had more audiology tests and the results show I now need to completely remove myself from any loud noise to protect what hearing I have left. It seems the years have finally caught up with me.

"I'm looking at options that will enable me to carry on playing in the future. So hope to be back [as soon as possible].

"Really sorry about this as we never cancel shows. Hope to see you all soon."

TIGERTAILZ in 2015 tapped its bassist, Rob Wylde, to sing for the group following the departure of Jules Millis. Wylde was previously the frontman in TEENAGE CASKET COMPANY and the U.K. POISON tribute act POIZON.

I’m very sad to inform you that we have had to cancel our show at Hard Rock Hell in March.