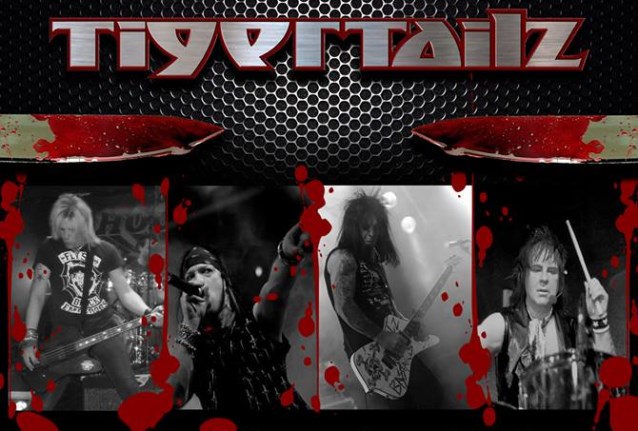 "The Shoe Collector", the new video from U.K. glam metal legends TIGERTAILZ, can be seen below. The clip was inspired by a short film written and directed by the band's late bassist Pepsi Tate, who died of cancer in 2007. Guitarist Jay Pepper tells Classic Rock: "We thought the 'TAILZ fans across the world would love to see the film and it would be a great idea to write a song to go with it. That led to the idea of releasing a video containing clips of the film — then to releasing the film as it was originally made by Pepsi. We also want to keep the focus on the charity started by his wife Shan, called Amser Justin Time."

"The Shoe Collector" comes off TIGERTAILZ's new EP, "Knives", which will be released on October 15 via Scarlet Records. The CD was recorded at Red Rock Studios in South Wales.

"Knives" is the first new music from TIGERTAILZ in almost six years, a new dawn that sees the band step it up on every level.

Pepper tells Classic Rock: "Despite being 'punched in the gutz' a million times and suffering more setbacks than most people experience in their lifetime… we're back!

"If you loved [1990's] 'Bezerk' and that big 'TAILZ sound of the '80s and '90s, 'Knives' ticks all the boxes. It's back to our roots with big melodic hooks, big choruses and even bigger guitar riffs."