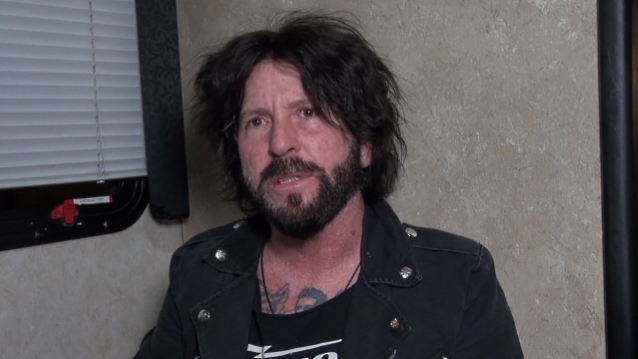 In an exclusive interview with Rock Scene, L.A. GUNS guitarist Tracii Guns looks back on his early experiences with music. He remembers being a young boy and sitting in the back of his mother's boyfriend's car in 1971 and hearing LED ZEPPELIN's "Whole Lotta Love" for the first time. "It was overwhelming audio fear," he recalls. "I remember thinking, I have to recreate that noise right now!"

On the way to the airport, they stopped by a newsstand. Tracii saw Jimmy Page, decked out in his dragon suit, on the cover of Creem magazine. His mom told him, "That's the guy making that noise on the record." "I saw that picture, and I'd never seen anything like it in my life," Tracii says. "The imagery, the sound, it completely captivated me when I was five and a half years old. From that point on it was all about, 'Mom, play me something like that!' 'Led Zeppelin II' was all I ever listened to until I was seven years old. The theremin coming in on the 'Whole Lotta Love' solo, that riff, the way Jimmy used reverb…everything had plate reverb on it. Everything sounded scary and dark and damp. I kinda pictured these dark figures in a really cloudy overcast environment being very moist and depressing. And I was so drawn to that." Shortly after, Tracii heard a BLACK SABBATH greatest-hits album. "The imagery on the cover was just, like, all these skeletons in a community, and the first song was 'Iron Man'," he says. "I was like, 'Oh! There's more of this.' It was like a horror movie for your ears."

Tracii also talks about when he first saw MÖTLEY CRÜE's Mick Mars, who had such an impact on him. "At the time, there was no one like him," he says. "He was fucking nasty. He was really tight, really nasty, a cool kinda distortion." He also talks about how he got his sound and his style by listening to Ted Nugent's "Stranglehold" at age 13, as well as the other tracks on the "Double Live Gonzo!" album, which was blues-oriented rock 'n' roll. "If I didn't get exposed to that I may have never gotten exposed to that as part of my style," Tracii says. "If I'm gonna learn 'Stranglehold', that means I've gotta learn the other three sides of that double album. That's where I started picking up on the basic rock 'n' roll blues sound. The blues is the discipline that goes into creating metal."

L.A. GUNS' new album, "The Devil You Know", was released on March 29 via Frontiers Music Srl.