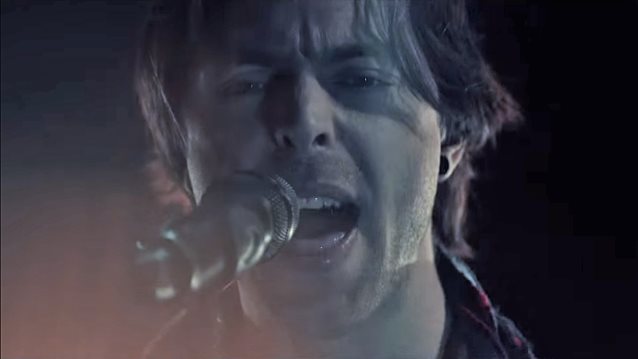 "Worthless", the new video from Welsh metallers BULLET FOR MY VALENTINE, can be seen below. The track is taken from the band's fifth studio album, "Venom", which was released in August 2015 via RCA. The CD marks the band's first release since the departure of longtime bassist Jason James and addition of Jamie Mathias (formerly of REVOKER).

The "Worthless" clip was directed by Stuart Birchall, who also recently helmed the videos for BULLET FOR MY VALENTINE's "Venom" and "You Want A Battle? (Here's A War)", produced by Jamie Whymark for Kode Media and filmed at Elstree Studios in London, England.

"The video itself is very direct; there's no narrative at all," says BULLET FOR MY VALENTINE singer/guitarist Matt Tuck. "We wanted to keep it super simple, and as we went really deep in narrative on 'Battle' and 'Venom', we thought it would be nice to keep it more performance-based. The song itself has become one of our favorites from 'Venom' and from all the comments we get from you guys we know it's one of yours too."

BULLET FOR MY VALENTINE drummer Michael "Moose" Thomas has taken a temporary leave of absence from the band to spend time with his wife, as they await the birth of his first child. Filling in for him is Jason Bowld (PITCHSHIFTER, AXEWOUND).

Said BULLET FOR MY VALENTINE in a statement: "Our brother Moose got the wonderful news late last year that he and his wife are expecting their first child together, which I'm sure you’ll join us in congratulating them on! In light of this, Moose has made the decision that, after ten years of non-stop touring, he's going to take a few months out to be at his wife's side around the birth. We support him 100% in this, and we thank our good friend Jason Bowld for agreeing to step in on the drums in the meantime."

The band added: "Our touring cycle will remain unaffected by this, and Moose will be back in the hotseat later this year ready to kill it again!"