"Life", the new Ville Juurikkala-directed video from Finnish melodic metallers SONATA ARCTICA, can be seen below. The song is taken from the band's new studio album, "The Ninth Hour", which will be released on October 7 through Nuclear Blast.

Commented SONATA ARCTICA frontman Tony Kakko: "I tried desperately to have at least one positive, uplifting song on this album and maybe this is it.

"We've been called 'happy metal' many times because of the melodies and so on, but lyrics are usually something that do not walk the sunny side of the road. They contrast the music.

"'Life', anyway, is telling people to find good things in life, find the things hurting and causing harm and replacing them with positive things with help of friends.

"Go out and be together with people, share experiences, live. I know it's a dumb thing to say, but life is better alive."

"The Ninth Hour" was produced by SONATA ARCTICA themselves and mixed by Pasi Kauppinen to create a typical yet refreshing sound that defines the spirit of the band in the year 2016.

After a North American tour with their friends from NIGHTWISH plus many headline shows around the globe, the band was once again able to take a look at the entire world as it is at the moment — on the edge of a possible armageddon. This spirit is reflected in the artwork of "The Ninth Hour".

"The artwork of our ninth studio album, 'The Ninth Hour', depicts a future utopian landscape on the background," Tony said. "Nature and human technologies are in balance. In the middle we have an hour glass contraption with a knob for us to meddle with. The right-hand side cup represents the nature side with no humans left, on the left we have the human dystopia after we have destroyed Nature. The idea I had was, that turning the knob will tilt the hour glass in one direction or another, and the other cup will slowly empty and that future will be erased. Biblically we are expected to repent and sacrifice on 'The Ninth Hour'… to dive right back to a more mundane reality, it's a fact that we are currently living in critical, historical times. Our decisions will define the future. Not only ours as a race, but the future of this entire planet. We need to make sacrifices and in many cases we will repent our already made choices."

Right after the summer festival season and the release of "The Ninth Hour", the band will embark on a European tour together with their labelmates TWILIGHT FORCE to present the new songs to their fans. 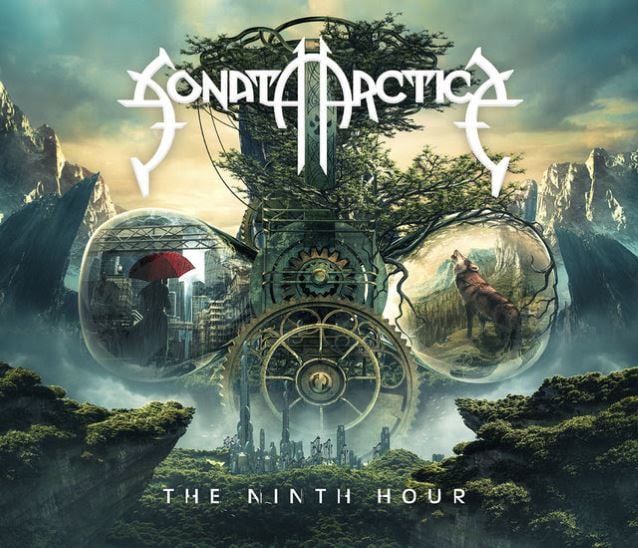