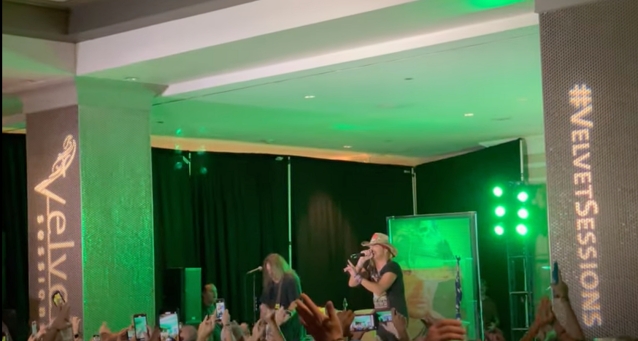 On Friday, September 24, POISON frontman Bret Michaels played an intimate concert the lobby of the Hard Rock Hotel at Universal in Orlando, Florida as part of the "Velvet Sessions" series. Fan-filmed video footage of the show can be seen below.

As a reality TV star, Michaels has appeared in an extensive library of hit shows including VH1's smash show "Rock Of Love", winning the highest-rated season of NBC's "Celebrity Apprentice" and Travel Channel's "Rock My RV", currently featured on the Discovery+ streaming platform. Fans have eagerly binged his TV hits on Hulu, Amazon Prime, Tubi, PlutoTV and AppleTV.

POISON's "The Stadium Tour" with MÖTLEY CRÜE, DEF LEPPARD and JOAN JETT & THE BLACKHEARTS was originally scheduled to take place last summer but ended up being pushed back to 2021, and then to 2022, due to the coronavirus pandemic.