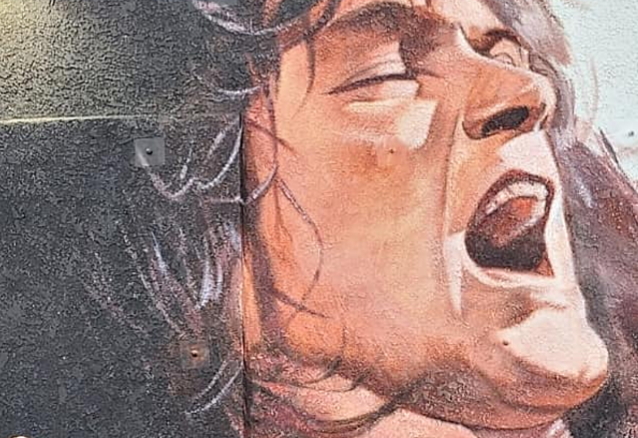 Artist Robert Vargas is currently painting a mural of Eddie Van Halen at the Guitar Center in Hollywood, California. The mural is expected to be completed later today (Sunday, January 17), and it will be unveiled on January 26.

Leeza London, on-air host for KXFM 104.7 FM, has uploaded an eight-minute video report on Vargas's latest creation. The segment, which includes an in-person interview with the artist, can be seen below.

Vargas is a contemporary artist known for his mixed-media portraits, murals and live events. Born and raised in the Los Angeles neighborhood of Boyle Heights, his best-known works include a City of L.A. commissioned mural "Can't Stop" of legendary SUICIDAL TENDENCIES frontman Mike Muir. He sees his public mural works both in Los Angeles and throughout the world as a means to reach a wider audience and promote accessible art and community through the creative process.

This is not the first mural that has been created in honor of the iconic musician. Less than a month after Eddie's death, airbrush artist Paul Archer painted an Eddie Van Halen mural on the back wall of Archer Airbrushing shop in Victoria, British Columbia, Canada.

Eddie passed away in October at the age of 65. His death was announced by his son, VAN HALEN bassist Wolfgang Van Halen.

Eddie died at Providence Saint John's Health Center in Santa Monica, California. Following his death, fans left flowers at his childhood home on Las Lunas Street in Pasadena, California. Additional flowers, candles and fan mementos were placed on Allen Avenue where Eddie and his brother, VAN HALEN drummer Alex, scratched their band's name into the wet cement of a sidewalk when they were teenagers.

In October, a City Council meeting was held in Pasadena, where a memorial honoring Eddie was discussed. City manager Steve Mermell was directed to come up with ideas for how to best honor the musician.